How to Work with Lines in Calculus

A line is the simplest function that you can graph on the coordinate plane. (Lines are important in calculus because when you zoom in far enough on a curve, it looks and behaves like a line.) This figure shows the graph of the line y = 3x + 5. 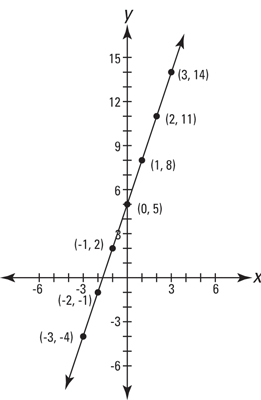 The most important thing about the line in this figure — at least, for your study of calculus — is its slope or steepness. Notice that whenever x goes 1 to the right, y goes up by 3. A good way to visualize slope is to draw a stairway under the line (see the figure, below). 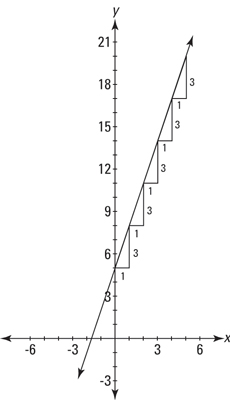 The vertical part of the step is called the rise, the horizontal part is called the run, and the slope is defined as the ratio of the rise to the run.

It’s easy to see that the slope of the above line is 3 (either from the rise and run of the steps drawn on the second figure, or from coordinates on the first figure like (1, 8) and (2, 11) where you go over 1 and up 3). But in many problems, it won’t be that obvious, so you’ll need to use the slope formula. Here it is:

Note that it doesn’t matter if you reverse the order of the points in the formula:

Keep in mind that if you reverse only the coordinates in the numerator or only the ones in the denominator, you’ll get the wrong answer.

If you have the equation of the line y = 3x + 5, but not its graph, you can graph the line the old-fashioned way or with your graphing calculator:

All lines, except for vertical lines, can be written in this form. Vertical lines always look like x = 6. The number tells you where the vertical line crosses the x-axis.

If m = 1 and b = 0, you get the function y = x. This line goes through the origin (0, 0) and makes a 45-degree angle with both coordinate axes. It’s called the identity function because its outputs are the same as its inputs.

With a little algebra, you can convert this equation into the one you already know: y = 3x + 5.