How to Identify and Name Similar Polygons

You can identify similar polygons by comparing their corresponding angles and sides. As you see in the following figure, quadrilateral WXYZ is the same shape as quadrilateral ABCD, but it’s ten times larger (though not drawn to scale, of course). These quadrilaterals are therefore similar. 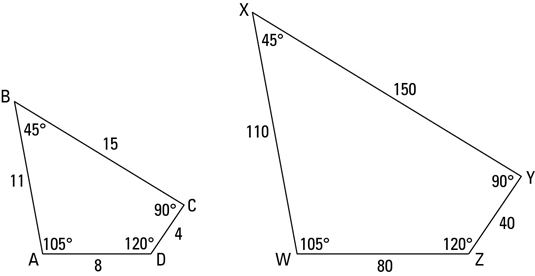 Similar polygons: For two polygons to be similar, both of the following must be true:

To fully understand this definition, you have to know what corresponding angles and corresponding sides mean. (Maybe you’ve already figured this out by just looking at the figure.) Here’s the lowdown on corresponding. In the figure, if you expand ABCD to the same size as WXYZ and slide it to the right, it’d stack perfectly on top of WXYZ.

A would stack on W, B on X, C on Y, and D on Z. These vertices are thus corresponding.

In short, if one of two similar figures is expanded or shrunk to the size of the other, angles and sides that would stack on each other are called corresponding.

When you name similar polygons, pay attention to how the vertices pair up.

Now use quadrilaterals ABCD and WXYZ to explore the definition of similar polygons in greater depth: