Character Arcs for Your Children's Book

By: Lisa Rojany Buccieri and Peter Economy and
Updated: 03-26-2016
From The Book: Writing Children's Books For Dummies, 2nd Edition

A character arc is just a simple visual tool to help you chart out your children's book character’s development. Her driving desire must be made clear from the start.

The changes your main character makes in her life can be drawn into this arc so you can see how she drives the action as the story starts, then something occurs that requires action, then her plight reaches a climax, and finally she heads toward resolution.

You use a character arc by assigning different points of your character’s development to the different dots; this helps ensure that your character goes through enough changes and struggles to make her and her story compelling. Here’s a summary of the steps that characters tend to face:

When we first meet your main character her driving desire is made clear (ascent begins), she has something happen to rock her world/challenge her reality (steeply ascending), she has to deal with it (ascending further), she fails (peak), she tries some more and fails (dips then peaks even further), she hits a seeming stalemate (flatline, but not for too long), she figures it out (begins descending), she hits a bump but instead of reverting back to old solution(s) tries out new one (further descending), and she ends a changed and ideally better person after all (fully descended). 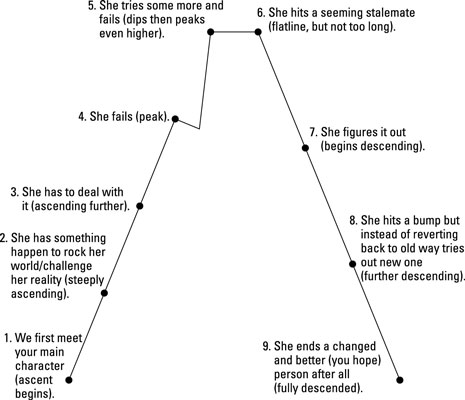 Take the old-fashioned story of Cinderella and apply it to the arc shown in the figure:

A character arc is just a fancy way of making sure your character has grown and changed throughout the course of the story.

Lisa Rojany Buccieri has written and ghostwritten more than 100 children's and grown-up's books, both fiction and nonfiction, including board books, picture books, and young adult series. Peter Economy is a bestselling author, coauthor, and ghostwriter of more than 55 books, including several For Dummies titles.