Colors as Italian Adjectives and Idioms

By: Antonietta Di Pietro and Francesca Romana Onofri and Teresa L. Picarazzi and Karen Antje Mller and Daniela Gobetti and Beth Bartolini-Salimbeni and
Updated: 03-26-2016
From The Book: Italian All-in-One For Dummies 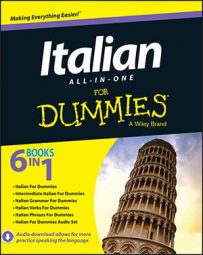 Expressions like cronaca rosa (gossip columns), romanzo giallo (mystery novel), avere una fifa blu (to be filled with terror), dama bianca (the spectre of a woman [folklore has it that her appearance is an omen of death]), and anima nera ([to have] a wicked soul) are common in Italian.

Here are a few more idiomatic expressions with colors:

When a photo isn't a colori (in color), it's in bianco e nero (white and black) in Italian, not in black and white as in the English language!

Despite the use of colors in so many Italian idioms, don't forget that colors are descriptors and that, as with every adjective in Italian, they agree in gender and number with the noun they describe:

Unlike in the English language, colors usually follow nouns in Italian: Indosso una gonna nera e un giaccone verde (I am wearing a black skirt and a green jacket).

Most of the colors are adjectives ending in -o, -a, (-i, -e in the plural forms), some end in -e (-i [plural]), while others remain unchanged in gender and number: