By: Geraldine Woods and
Updated: 08-16-2017
From The Book: English Grammar For Dummies

Explore Book Buy On Amazon
Here's a little trick for pinpointing the subject–verb pair of a sentence: Pop the question! Pop the question tells you what to ask in order to find out what you want to know. The correct question is all important in the search for information, as all parents realize.

WRONG QUESTION FROM PARENT: What did you do last night?

RIGHT QUESTION FROM PARENT: When you came in at 2 a.m., were you hoping that I'd ignore the fact that you went to the Carleton Club?

TEENAGER'S ANSWER: I didn't go to the Carleton Club! I went to the mall.

PARENT: Aha! You went out on a school night. You're grounded.

The first question to ask is not "Is this going to be on the test?" but "What's the verb?" (To find the verb, ask what's happening? or what is?) After you uncover the verb, put "who" or "what" in front of it to form a question. The answer is the subject. 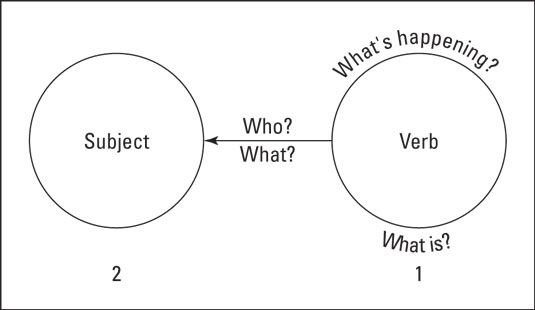 Check out this example:

Jack polishes his dives during hours of practice.

The pool has been closed by the Health Department.

Did you notice anything different about the last example sentence? The verb, has been closed, asks about something that happened to the pool, not about something the pool did. Has been closed is a passive verb (the action happens to the subject), not an active one (the subject does the action). Fortunately, "pop the question" works the same way for sentences with either active or passive verbs.

What are the subject and verb in the following sentence?

Roger will soon be smiling because of all the treasure in his ship.

Answer: The verb is will be smiling and the subject is Roger. Try one more. Identify the subject and verb.

No matter what the weather, Roger never even considers wearing a hat.

Answer: The verb is considers and the subject is Roger.