The Libyan Civil War: Free of Gaddafi after 42 Years

The Libyan civil war took place in 2011 as forces loyal to longstanding Libyan ruler Colonel Muammar Gaddafi battled rebels seeking to remove his regime from power. The war started in the coastal city of Benghazi with a series of protests, but when security forces fired into the crowd, Libyans across the nation were enraged and the Benghazi protests escalated into a full-blown civil war that spread across all of Libya.

Libya had been ruled for 42 years by Gaddafi — a cunning dictator who often belittled and antagonized his own people. Gaddafi so suppressed dissidents that many Libyans were afraid to even say his name. Libya's oil revenues made it one of the more prosperous nations in Africa, but nothing went to the people. Many Libyans were malnourished and poor, and Libyan children suffered high rates of anemia. (For more insight on Gaddafi and Libya's history leading up to the war, see the article, Colonel Muammar Gaddafi.)

The first of the Benghazi protests took place on February 15, 2011. A week later, Gaddafi opponents overtook the city and rejected Gaddafi's leadership by establishing an interim government called the National Transitional Council (NTC).

The West had long considered Gaddafi to be a nuisance, so France and the United Kingdom (along with Lebanon) seized the opportunity to convince the United Nations to pass resolutions that froze the assets of Gaddafi and his closest Libyan supporters and established a no-fly zone over Libya. A subsequent U.N. resolution authorized member nations of the U.N. Security Council to use "all necessary measures" to prevent the Libyan military from attacking civilians. These resolutions were all in place by February 26, 2011. Meanwhile, the rebels gained land and towns around Benghazi.

On March 19, the Libyan army retaliated and reclaimed several cities along the Mediterranean before pushing towards Benghazi. The army attacked Benghazi, but rebel forces held them off. Finally, the French Air Force, acting with authority from the U.N. resolution to protect Libyan civilians, bombed the Libyan army and set them into retreat. This act by France allowed the rebellion to continue. 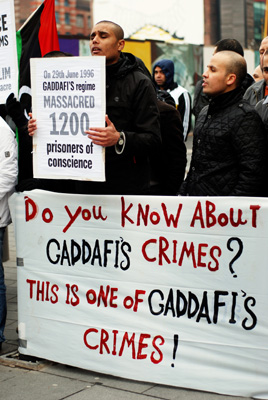 Credit: ©ilbusca, 2011
During the war, Libyans near and far from their homeland protested Gaddafi's regime, such as these Libyans in Liverpool, England.

Gaddafi declared a ceasefire but failed to uphold it, and the rebels and Gaddafi's loyal army continued to fight through the summer. Gaddafi offered several more ceasefires but rebels rejected them all. Rebels also rejected attempts made by the African Union to end the conflict — because none of the proposed plans for peace included Gaddafi's ousting from the government.

In August, rebels launched an offensive along the coast that reclaimed some of the land and towns they had lost months before and ultimately captured the city of Tripoli, Libya's capital. Gaddafi evaded capture and his loyal military continued to fight. On September 16, the United Nations recognized the National Transitional Council as the legal government of Libya. Muammar Gaddafi remained at large until October 20, when he was captured and killed attempting to escape. The NTC declared the liberation of Libya and the official end of the war on October 23, 2011.

Libya after the war 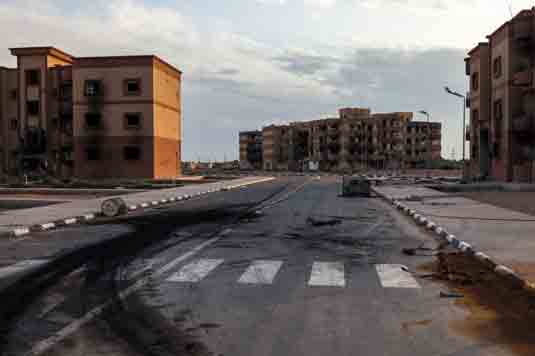 Credit: ©Karim Mostafa, 2013
Some Libyan cities, such as Tawergha, are now ghost towns after the revolution.

Since the war, some former Gaddafi loyalists have waged a few small insurgencies. The NTC was persuaded to recognize an alternative government in the former Gaddafi stronghold of Bani Walid. The NTC has also had problems with some of the militias that formed during the rebellion that have since refused to disarm. Some demonstrations have occurred as the NTC has tried to both forcibly disarm the militias or assimilate them into the Libyan military.