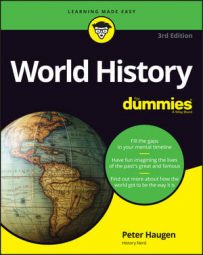 Explore Book Buy On Amazon
One effective way to approach the tremendous breadth and depth of world history is to break it into digestible bits of information. Here are four approaches to putting the many millennia and decades in perspective by looking at civilizations and societies as they changed, at ruling dynasties, at advances in science and technology, and at the deadliest wars.

An abridged timeline of civilizations and societies

Here’s a selected sample of societal mileposts as civilizations have developed and grown since the rise of the earliest settled communities.

About 9000 BCE: People built the first of many successive human settlements at Jericho, on today’s Palestinian West Bank.

About 3150 BCE: Upper Egypt and Lower Egypt united into a single political entity under King Narmer.

About 2800 BCE: The Indus Valley civilization (also called Harappan) flourished in what is today northwestern India and southeastern Pakistan.

2200 BCE: Ibbi-Sin, ruler of the city-state of Ur (today’s southern Iraq) was unable to mount an effective defense as the seminomadic Amorites attacked repeatedly.

Around 2000 BCE: Under the rule of the Xia Dynasty, considered to be the kingdom’s first ruling family, China became a center of bronze-based metalcraft.

Around 2000 BCE: Farmers and herders from Ethiopia traveled south to settle in what is now Kenya.

Around 1800 BCE: The city of Troy was a thriving coastal community in Anatolia.

1400 BCE: After the Palace of Minos at Knossos, Crete, was destroyed, possibly by invaders, the once-dominant Minoan civilization fell into steep decline as Mycenae, on the Greek mainland, became a military and economic power center.

About 1200 BCE: Along the Gulf of Mexico, in today’s Mexican state of Veracruz, the Olmec civilization took shape.

11th century BCE: Tribes descended from the patriarch Abraham united to create the Kingdom of Israel, under King Saul.

771 BCE: Rebel forces from the vassel state of Shen, allied with nomadic tribes from the west, overran the capital city of Hàojīng (near today’s ’s Xi’an, China) marking the end of the Western Zhou Dynasty.

600 BCE: Greeks from what is now Turkey founded the city of Marseille, France.

509 BCE: Romans rebelled against King Lucius Tarquinius Superbus and drove him into exile, replacing the former monarchy with a Greek-style republic.

About 200 BCE: In the Andes of South America, the Nazca culture arose after the fall of its predecessor, the Chavín culture.

First century BCE: Mesoamericans, likely of the Olmec civilization, developed a calendar that would be adopted and adapted by subsequent pre-Columbian civilizations in Mexico and Central America. The most complex and accurate of ancient calendars, it’s known as the Maya Calendar.

400 CE: Tradition says that in this year, the legendary Richū became emperor of Japan upon the death of his father, Nintoku.

410 CE: Honorius, emperor of the Western Roman Empire, told Roman communities in Britain to look to their own defense, effectively ending Roman rule on the island.

Ninth century CE: England was under the control of Anglo-Saxon rulers.

1200 CE: After years of diplomacy and military force, the Central Asian tribal leader Temüjin brought warring confederations together into a Mongol alliance. Renamed Genghis Khan, he went on to conquer a massive empire.

1492: The navigator Christopher Columbus arrived on American islands, bringing with him diseases that would devastate the indigenous populations of the Western Hemisphere as Spanish, Portuguese, French, English, and other European powers forcibly colonized the American continents.

1619: The governor of Virginia, an English colony, bought “20 and odd” African people to serve as involuntary laborers.

1807: The Parliament of the United Kingdom passed the Abolition Act, prohibiting British participation in the transatlantic slave trade.

1917–1918: At the end of World War I, the Ottoman, Austro-Hungarian, German, and Russian empires all ceased to exist.

1997: Prince Charles, heir to the throne of the United Kingdom, declared “the end of the (British) empire” as China peacefully took possession of the Territory of Hong Kong, a British colony since 1841.

Dynasties are not forever: An abridged timeline of power families

Throughout civilization, many rulers have passed their titles and authorities to offspring. Some cultures stand out as exceptions, especially in recent centuries, but the right to govern has often been assumed to be assigned by genetics. Nepotism has been a powerful force in world history. Here is an overview of some of the world’s most notable dynasties.

Breakthroughs in science, engineering, and medicine

The greatest minds produce ideas and discover concepts that rearrange humankind’s understanding of the world and the universe around us. They also devise inventions that change the way people live. Here’s an extremely abridged list of some of the greatest breakthroughs.

About 1600 BCE: A Babylonian astronomer, his name lost to time, tracked the appearances of Venus over a 21-year period. The record of his research lay buried in the ruins of the Library of Ashurbanipal (a Neo-Assyrian emperor) for centuries until 19th-century CE archaeologists unearthed it.

About 100 CE: Cal Lun, an official of the Chinese royal court during the Han Dynasty, is traditionally credited with the invention of paper.

About 1439: In Strasbourg, near today’s French–German border, Johannes Gutenberg developed a system of movable type for a printing press of his own design and began printing books. The Gutenberg Bible, perhaps printed by Johann Fust and Peter Schöffer (who foreclosed on Gutenberg’s invention to settle a debt) is the most famous. Printing technology and books began to spread across Europe.

1543: In his book On the Revolutions of the Heavenly Spheres, the Polish polymath Copernicus described a solar system with the Sun at its center. This challenged the accepted geocentric (Earth-centered) model described by the astronomer Ptolemy, who lived in Roman Egypt during the second century CE.

1628: English physician William Harvey published his findings on the circulation of blood and the human circulatory system, correctly describing a single system of veins and arteries.

Around 1712: Tomas Newcomen, an English ironmonger, borrowed ideas from other inventors and put them together to develop a commercially viable steam engine. First used to run a pump, the engine would revolutionize industry and transportation.

1796: Edward Jenner, a physician from Gloucestershire, England, pioneered the field of immunology when he demonstrated that a deliberate infection with cowpox could serve as protection against the related, but far more serious, disease smallpox. He coined the word vaccine.

1881: Louis Pasteur of France isolated the deadly anthrax bacterium and developed a vaccine to protect against it.

1896: Guglielmo Marconi began a series of demonstrations for the British government to introduce his wireless telegraph system — the beginning of radio.

1905: Albert Einstein, a young patent clerk in Switzerland, published two articles about the properties of light and time. Central to his argument is the idea that mass and energy are the same thing, expressed in his famous equation E=mc2 (energy equals mass times the speed of light squared).

1928: Alexander Fleming, a London physician, observed that a fungus growing in one of his laboratory petri dishes could halt the growth of a bacterial culture. Fleming, credited with discovering penicillin, shared the 1945 Nobel Prize in Medicine with researchers Boris Chain and Howard Florey, who refined his discovery into a world-changing agent against infection.

1953: In an article for the journal Nature, biophysicist Francis Crick and molecular biologist James Watson described the double-helix structure of the DNA molecule, a breakthrough enabled by the work of crystallographer Rosalind Franklin. Their discovery has enabled all genetic research ever since.

1958: Jack St. Clair Kilby, an engineer for Texas Instruments, put an entire electronic circuit on a single wafer of silicon, inventing the microchip.

1983: American biochemist Kary Mullis invented polymerase chain reaction (pcr), a way to quickly make millions or even billions of copies of a small DNA sample. This enabled many kinds of DNA analysis for fields including medicine, zoology, forensic investigations, archaeology, and paleontology.

2020: The pharmaceutical companies Pfizer-BioNTech and Moderna developed and made available a new kind of vaccine for use in the fight against the COVID-19 pandemic. Unlike traditional vaccines, including others rapidly developed for use in the pandemic, these vaccines use messenger RNA (mRNA, a nucleic acid related to DNA) carrying a code that teaches human DNA to make proteins that trigger an immune response against the invading virus.

10 of the deadliest wars in history

Studying history’s wars includes the tricky business of figuring out how many combatants were killed (a figure that isn’t always well documented) and the often-impossible business of estimating how many noncombatants died from war-related causes.

Scholars have cited the following ten wars, listed in order of fatalities, as the deadliest ever:

Taiping Rebellion: (Christian rebels versus China’s Qing Dynasty), 1850–1864; as many as 30 million deaths, with no reliable breakdown of military versus civilian casualties

Second Sino-Japanese War: (China versus Japan), 1937–1945; an estimated 29 million deaths: about 4 million to 5 million military, as many as 25 million civilian

Manchu Invasion of China: (contentious transition from Ming to Qin dynasties), 1618–1683; as many as 25 million deaths, with no reliable breakdown of military versus civilian casualties

Dungan Revolt: (Hui Muslim rebels versus China’s Qing Dynasty), 1862–1877; at least 10 million combatants and civilians killed, most of them members of the Hui minority

Chinese Civil War: (Communist Chinese versus Republic of China) 1927–1936 and 1946–1950; an estimated 8 million deaths, military and civilian, many caused by war-related famine

Napoleonic Wars: (French Empire versus a series of international coalitions of opposing powers) 1803–1805; as many as 6 million deaths, military and civilian, over the course of this series of wars

Peter Haugen is an experienced journalist, publisher, and author. He has written several history titles and appeared in publications like History Magazine and Psychology Today.