The Basics of Drawing Fashion Hair

By: Lisa Arnold and Marianne Egan and
Updated: 11-04-2021
From The Book: Fashion Drawing For Dummies

Hair shouldn’t be the main focus in fashion illustration. It should convey a mood without overpowering the most important part of fashion illustration — the clothes and accessories. To create gorgeous hair and avoid the mistakes found in lesser fashion drawings, keep these three basic hair facts in mind:

Hair grows out from the hairline, which forms over the forehead and temples. Everyone’s hairline is different, but it always follows the natural contour of the forehead. Like the hairstyle in general, the hairline shouldn’t be a focal point on a fashion illustration; it should look natural.

A hairline that’s too low looks Neanderthal, and one that’s too high leaves too much empty forehead. To mimic a person’s natural hairline, use a gentle curve that follows the shape of the head. Keep in mind that fashion figures are known for having elegant and high foreheads.

Here’s how to draw a curving hairline on a front-facing figure:

If your fashion figure is in profile, follow the preceding steps but continue the curve of the hairline to the top of the ear and then behind the ear on the neck. Fill in the hair at the side and back of the head and behind the ear.

You see more of the back of a fashion figure’s head when looking at a profile, which means you have to include more hair in your fashion figure profiles. 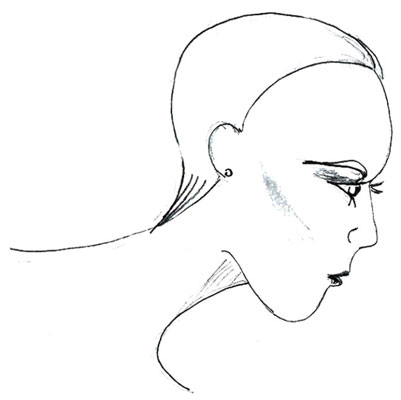 A part is a line that determines the hair shape and direction in which the hair falls. Every hairstyle starts with a part (or lack thereof); you can’t begin to draw a hairstyle until you establish whether your model will have a side part, a middle part, or no part at all. Part placements, like hairstyles, convey different looks that may be more appropriate for a particular fashion style.

You can part hair in tons of different ways (some of which are pretty extreme), or you can avoid parts completely. If you stick with the following three parting styles that are commonly used in fashion illustration, your figures will always look stylish:

Parting hair for men is the same as parting hair for women. You can go with a center part, a part off to the side, or no part (as in brushed forward or backward).

To draw a part, first draw a fashion figure’s head, adding a hairline across the forehead. Then follow these guidelines: