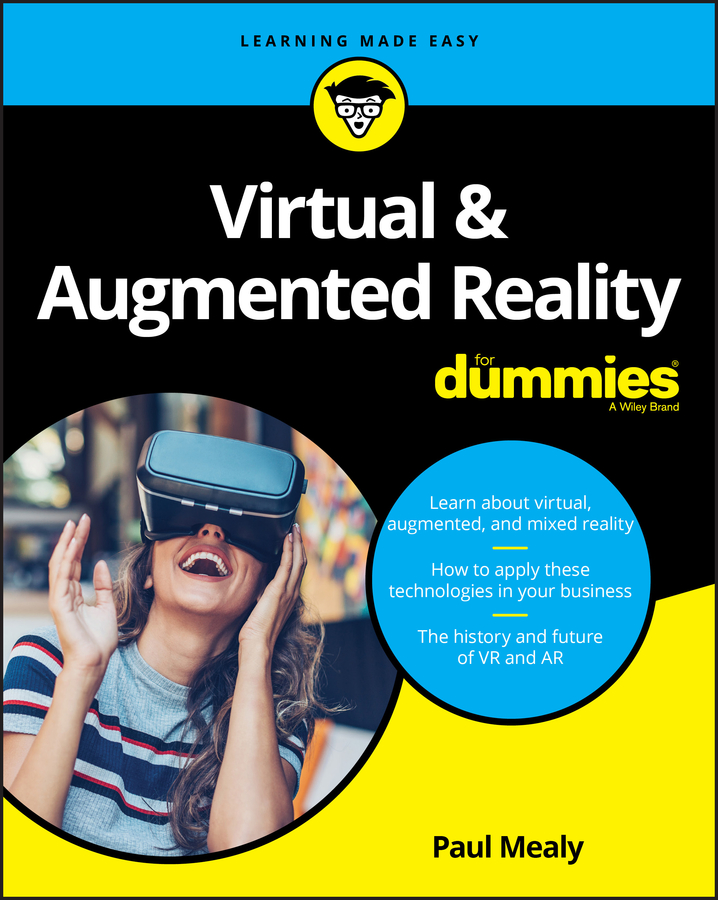 An easy-to-understand primer on Virtual Reality and Augmented Reality

Virtual Reality (VR) and Augmented Reality (AR) are driving the next technological revolution. If you want to get in on the action, this book helps you understand what these technologies are, their history, how they’re being used, and how they’ll affect consumers both personally and professionally in the very near future.

With VR and AR poised to become mainstream within the next few years, an accessible book to bring users up to speed on the subject is sorely needed—and that’s where this handy reference comes in! Rather than focusing on a specific piece of hardware (HTC Vive, Oculus Rift, iOS ARKit) or software (Unity, Unreal Engine), Virtual & Augmented Reality For Dummies offers a broad look at both VR and AR, giving you a bird’s eye view of what you can expect as they continue to take the world by storm.

* Explores the many ways AR/VR are being used in fields such as healthcare, education, and entertainment

* Includes interviews with designers, developers, and technologists currently working in the fields of VR and AR

Perfect for both potential content creators and content consumers, this book will change the way you approach and contribute to these emerging technologies.

As we look at how virtual reality (VR) and augmented reality (AR) will impact our world, we need to consider the technology hype cycle. Technological waves go through various peaks and troughs before they reach mass consumer adoption. Information technology research firm Gartner once proposed what it called the Gartner Hype Cycle, a representation of how the expectations around transformative technologies play out upon release. The Gartner Hype Cycle can help predict how a technology will be adapted (or not) over time. Both the Internet (with the dot-com crash) and mobile pre-2007 went through similar (if not exactly analogous) market curves. In the beginning, an Innovation Trigger kicks off interest in the new technology, triggered by early proof-of-concepts and media interest. Next is the Peak of Inflated Expectations. Buoyed by the early work and media buzz, companies jump in with higher expectations than the technology can yet deliver upon. What follows is the Trough of Disillusionment, where interest in the technology begins to dip as implementations of the technology fail to deliver on the lofty expectations set by the initial Innovation Trigger and media buzz. The Trough of Disillusionment is a difficult space for technology, and some technologies may die out in this space, never fulfilling their initial promise. Those technologies that are able to weather the storm of the Trough of Disillusionment reach the Slope of Enlightenment, as second- and third-generation products begin to appear and the technology and its uses are better understood. Mainstream adoption begins to take off, often paying dividends for the early adopters able to see their way through the trough with their ideas and executions intact. Finally, we reach the Plateau of Productivity, where mass adoption truly begins, and companies able to weather the stormy waters of the hype cycle can see their early adoption profit. Determining where VR and AR are in this cycle can be useful in making your decisions on how to approach these technologies. Does it make sense for your business to jump into VR and AR technologies now? Or are things not ready for prime time, and should you perhaps hold off for a few more years? Gartner claims that VR is just leaving the Trough of Disillusionment and headed into the Slope of Enlightenment at the end of 2017, with a payoff of mass adoption within two to five years. AR, on the other hand, is listed by Gartner as currently wallowing in the Trough of Disillusionment, putting mass adoption for AR at a more conservative five to ten years out. Though the Trough of Disillusionment sounds like an ominous place for AR to be, it’s a necessary phase for technology to pass through. Innovative technology, before hitting consumers’ hands, needs to go through the grind of establishing an identity and determining where it fits in the world. Manufacturers need to figure out what problems VR and AR solve well and what problems these technologies do not solve well. That often requires numerous trials and failures to discover. AR as a mass consumer device is in its adolescence. Manufacturers and developers need time to figure out what form factor it should exist in, what problems it can solve, and how it can best solve them. Rushing a technology to market before these questions can be answered can often cause more problems than it solves, and is something that manufacturers of any emerging technology, including VR and AR, should be wary of. Further, Gartner released this Hype Cycle report for VR and AR less than one month after Apple’s ARKit announcement and a full month ahead of Google’s ARCore announcement. An argument could be made that those two releases technically triggered mainstream adoption purely by the install base of ARKit and ARCore. However, that feels slightly disingenuous. Installed base alone does not automatically equal mainstream adoption (though it is a large piece of the puzzle). When using a technology becomes frictionless and nearly invisible to the end user, when using that technology becomes as second nature as starting up your web browser, checking your email on your mobile device, or texting a friend, that is when a technology has truly hit mainstream adoption. Neither technology has yet reached this level of ubiquity, but both are looking to hit their stride. The long run of VR and AR holds the same promise of technological waves as the personal computer and the Internet. The time for you to take action on these technologies is now, whether it’s to simply research what they can do for you, to dive into purchasing a device for your own consumption, or even begin creating content for VR and AR.