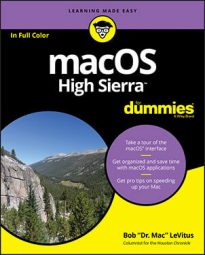 Whether you've purchased a new Mac with macOS High Sierra preinstalled or you've upgraded from a previous version of macOS, you'll find that macOS High Sierra makes your Mac easier to use and offers myriad improvements to make you more productive. Get additional information on things you should never do to your Mac, a compendium of useful and timesaving keyboard shortcuts, a discussion of when folders are too full and when (and when not) to create subfolders, recommendations for backing up data, and a short discussion of iDevices and Continuity.

To learn about all things Macintosh and macOS High Sierra, hop onto the web, check out these sites, and stuff your brain with Mac information:

Continuity is the blanket term for a set of features in High Sierra and iOS 8 or newer that allow you to seamlessly move between your iPhone, iPad, and Mac. At present, four features provide Continuity:

They're a useful little quartet, but they work only with relatively new Apple devices. So before you get too excited, peruse the system requirements for each feature.

How to use Handoff

Handoff lets you start a document, email, or message on one Apple device and pick up where you left off on another. It works with Apple apps including Mail, Safari, Maps, Messages, Reminders, Calendar, Contacts, Pages, Numbers, and Keynote as well as some third-party apps. To use Handoff, do the following: Another way to open an app available for Handoff on your iDevice is to double-click the Home button and then tap the app (Keynote in this example) in the multitasking display. Going the other direction, if you had started the presentation on your iDevice, you'd see a Keynote icon on the left side of your dock, as shown. Click the icon to launch Keynote, which will open the presentation that's currently open on your iDevice. You can also use High Sierra's app switcher (Command-Tab) to open an app that's displaying a Handoff icon in your dock. If you decide you want to disable Handoff: Try using Handoff with Safari. If you start reading a web page on one device, as long as you don't quit Safari you can pick up reading it on any of your other devices. You might find that you use Handoff more with Safari than with documents, messages, and mail combined. Bottom line: Handoff is a sweet feature when it works. Handoff still isn't robust for some users, with reports of inconsistent or nonexistent behavior with Handoff appearing a year after its introduction. I'm sure Apple will get it sorted out in an iOS or High Sierra update. Meanwhile, if it stops working (or never started working) for you, you might have some luck by disabling Handoff, logging out of iCloud on all devices, restarting all the devices, and then reenabling Handoff. It's a pain but it works more often than not (assuming all of your gear meets the requirements).

How to use Personal Hotspot

How to make phone calls with Continuity

With Continuity, all SMS and MMS text messages that you send and receive on your iPhone appear on your Mac, iPad, and iPod touch, even if the person on the other end is less fortunate and doesn't use an iPhone or a Mac. Furthermore, you can reply from whichever device is closest to you, including your iPad, iPod touch, or Mac. To use Continuity for SMS and MMS with your iPhone and your Mac, iPad, or iPod touch, all of your iDevices need iOS 8.1 or higher and your Macs need macOS 10.10 Yosemite or higher. And all devices need to sign in to iMessage using the same Apple ID. Now enable SMS on your iPhone by taping Settings→Messages→Send & Receive→You Can Be Reached by iMessage At and enable the check boxes for both your phone number and your email address. Finally, tap Settings→Messages→Text Message Forwarding and enable the devices you would like this iPhone to forward SMS messages to. Each device you enable will display a code; just enter the code on your iPhone to verify the SMS feature and you're done.

When working in macOS High Sierra, would you like to ensure that you won't lose more than a little work no matter what happens — even if your office burns, floods, is destroyed by tornado, hurricane, or earthquake, or robbed? If so, you might want to follow the setup described here. I am continually testing new backup solutions, so the software I use can change from month to month. I've tried most of the popular backup solutions and many of the more obscure ones, but before I say anything about my current setup, here is what I'm trying to accomplish (at a minimum): I want at least three (reasonably) current backup sets with copies of all my files. I update two of them every day and keep the third somewhere offsite, such as in a safe deposit box at the bank. Every month or two, I swap the offsite backup for the latest backup from home — and then reuse the older backup disk. Note that after I set up the following programs, they run automatically in the background with no further action on my part. Think of this as a "set and forget" feature.

One last thing: I test the integrity of each backup regularly, and so should you. It confirms that the files that I think are there are actually there, and it reassures me that the files in that backup set aren't corrupted or damaged and are capable of being restored successfully.
page 1
page 2
page 3