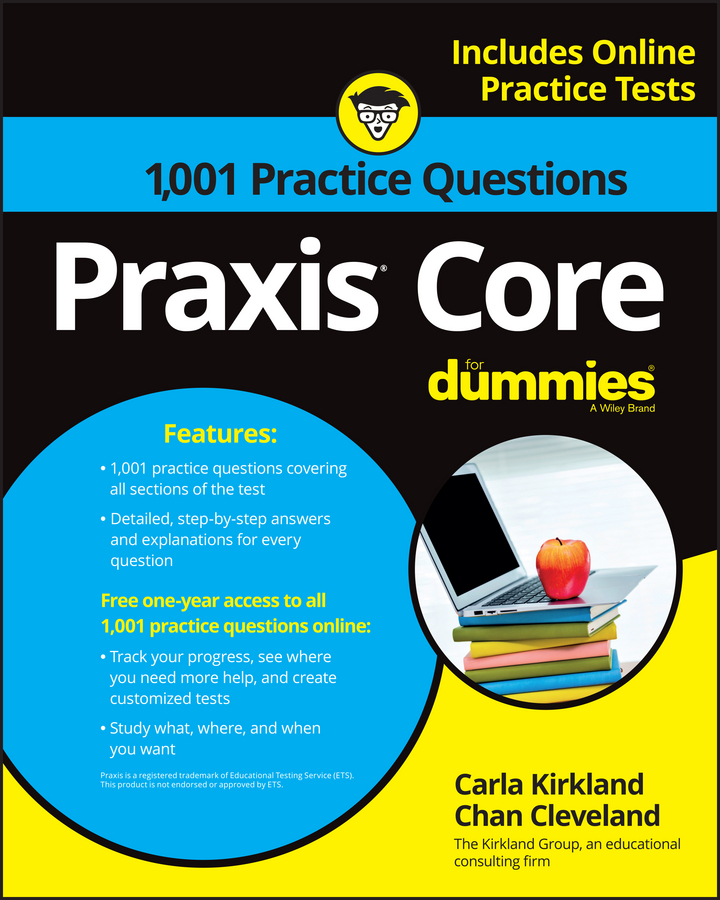 So, you're an aspiring teacher with your sights set on educating students. Good for you! Teaching is a noble profession, and it's quite a competitive one too. Each year, over 600,000 prospective educators take the Praxis exams—but not all of them will come out of these standardized tests with their certifications in tow. If you're wondering how you can up the ante and ensure you gain the credentials to score that coveted spot at the front of the classroom, the answer is a practice question away!

1,001 Praxis Core Practice Questions For Dummies goes beyond the instruction offered in typical study guides, offering more than a thousand practice opportunities for you to test and assess your understanding of what you can expect to encounter on the actual exam. Complemented with detailed, step-by-step solutions, each practice Praxis Core question gives you a leg up on the competition to earn your hard-earned position as the future's next great educator!

The best cones are those filled with chocolate ice cream. The second-best—well, a distant second—are the ones you'll find on the Praxis Core exam. As you'll see in the following practice questions, you may be asked to calculate a cone's surface area (in this case, based on its lateral area and base area) or its volume (in this case, given its radius and slant height). Practice questions A cone has a lateral area of and a base area of . How many square centimeters is the surface area of the cone? Refer to the following figure for the next question. What is the volume of the cone? Answers and explanations The correct answer is Choice (E). The surface area of a cone is the sum of its lateral area (L) and base area. A cone has only one base, so you add B to the lateral area instead of 2B. The surface area of the cone is The correct answer is Choice (B). The volume of a cone is a third of the product of its base and its height. The height of this cone isn't given, but you can use the Pythagorean theorem to find it. The height, a radius, and the slant height form a right triangle in which the height and the radius are perpendicular and the slant height is the hypotenuse. The height of the cone is 24 m. That times a third of the base area is the volume of the cone: The volume of the cone is

If you encounter a right triangle question on the Praxis Core exam, you can use good old Pythagoras' theorem to work out the answer. In some cases, you'll be able to skip the calculations and solve the problem using the properties of common right triangles! Both of the following practice questions can be worked out using the Pythagorean theorem—but if you know your common right triangles, you'll be done before you can say "Eureka!" Practice questions For right triangle ABC, what is the measure of side AB? A. 64 m B. 36 m C. 18 m D. 4 m E. 8 m A triangle has sides of 24 dm, 10 dm, and 26 dm. Is the triangle a right triangle? A. Yes B. No Answers and explanations The correct answer is Choice (E). For every right triangle, the square of the hypotenuse is equal to the sum of the squares of its legs. The legs are the sides that form the right angle, and the hypotenuse is the side that's across from the right angle. The formula is commonly represented as a2 + b2 = c2, where a and b are the legs and c is the hypotenuse. Fill in what is known and solve for what is unknown: AB is 8 m. Knowing the side lengths of common right triangles can shave off much-needed time. For example, well-known right triangles include the 3-4-5 triangle (and its multiples, such as the 6-8-10 and the 9-12-15), the 5-12-13 triangle, and the 8-15-17 triangle. Based on this information, you could have known the other side length would be 8 without using the Pythagorean theorem. The correct answer is Choice (A). If the triangle is a right triangle, the Pythagorean theorem applies to it — that is, the sum of the squares of the two leg measures equals the square of the hypotenuse. You can substitute the triangle's measures into a2 + b2 = c2 and see whether the equation works: The equation is true, so the triangle is a right triangle.

When you take the Praxis Core exam, it pays to have a well-rounded knowledge of circles—especially their area and circumference. In the following practice questions, you work both backwards (finding a circle's radius given its circumference) and forward (finding a circle's area given its radius). Practice questions A circle has a circumference of 20π in. What is the radius of the circle? A. 4.5 in. B. 15 in. C. 10 in. D. 20 in. E. 17.5 in. The two circles have congruent radii. If the radius of one circle is 3 m, what is the area of the other circle, rounded to the nearest hundredth? A. 6π m2 B. 18 π m2 C. 14.31 m2 D. 28.26 m2 E. 18.35 m2 Answers and explanations The correct answer is Choice (C). The circumference of a circle is 2 times pi times the radius. You can use the formula for circumference, fill in what you know, and solve for r, the radius of the circle: The radius of the circle is 10 in. The correct answer is Choice (D). The circles' radii are congruent, which means they have the same measure. Because one circle's radius is 3 m, the circle in question has a radius of 3 m. You can use the formula for the area of a circle: Because pi rounded to the nearest hundredth is 3.14, you can multiply 9 by 3.14: 9 × 3.14 = 28.26 The area of the circle, rounded to the nearest hundredth, is 28.26 m2.

Interior angle problems on the Praxis Core exam are pretty straightforward—well, most of the time. As you’ll see in the following practice questions, it’s also useful to have a good overall knowledge of angles for the exam. The formula for the sum of interior angles for a polygon is where s is the number of sides of the polygon. In the first practice question, you’re asked to find the missing interior angle in a quadrilateral. The second question gets a little trickier, because it also tests your knowledge of isosceles triangles as well as vertical angles. Practice questions Refer to this diagram to answer the following question. What is the value of k in the diagram? A. 15 B. 105 C. 285 D. 35 E. 75 What is the value of n in the following diagram? A. 80 B. 140 C. 120 D. 65 E. 40 Answers and explanations The correct answer is Choice (E). The sum of the interior angle measures of a quadrilateral (four-sided polygon) is 360 degrees. Therefore, the sum of 108, 101, 76, and k is 360. You can set up an equation and solve for k. The correct answer is Choice (E). If two sides of a triangle are congruent, the angles opposite those sides are congruent. Therefore, the two triangle angles that aren’t labeled with measures have the same measure. Their sum must be 80 degrees, because the sum of the interior angles of the triangle is 180 degrees and the labeled angle is 100 degrees: 180 – 100 = 80 Because the sum of the two angles is 80 degrees and the two angles have the same measure, each one has to be 40 degrees. One of them is a vertical angle to the n-degree angle, and vertical angles are congruent, so the n-degree angle is also 40 degrees. Therefore, the value of n is 40.

Like some math classes, a ray starts at a certain point and goes on forever. Like the Praxis Core exam, a line segment starts at a certain point, and ends at another point—of course, in the case of the exam, these points never seem to be far enough apart for some students! To help you on test day, the following practice questions offer a sample of the types of line- and ray-related questions you'll run into. Practice questions Which of the following qualifies as a name of this ray? Select all that apply. What is indicated by the vertical marks on the two following line segments? A. They are opposite sides of the same polygon. B. They are diameters of the same circle. C. They have unequal measures. D. They are congruent. E. Their ratio is pi. Answers and explanations The correct answers are Choices (C and E). A ray is named by its endpoint followed by any other point on the ray. The endpoint of the ray is J, and the two other labeled points on the ray are K and L. Therefore, both qualify as names of the ray. The correct answer is Choice (D). Those marks indicate that segments are congruent, meaning that they have the same measure. Segment congruence can also be indicated by double marks, triple marks, and so on, as long as both or all the congruent segments have the same numbers of identical marks.