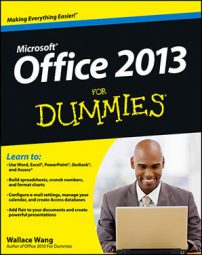 There’s no substitute for effective antivirus software if you use your computer the way most people do. Most antivirus programs automatically connect to Outlook 2013, scan incoming message for viruses, and automatically block any message that might be infected.

One of the biggest risks for every computer owner is a virus infection. You’ve probably heard news reports about computer viruses that spread across the Internet faster than a wildfire and to much worse effect. Every day new viruses seem to appear, and each new virus gets sneakier about how it wheedles its way into your system.

Many viruses come to you through e-mail, often appearing as e-mail messages that look like they’re from people you know. Others sneak in through your browser when you’re surfing the web. Most viruses only create a mild annoyance, but some are so destructive that they can render your computer permanently useless and destroy all the work you’ve created and left on that machine, then move on to all your friends’ computers and do the same to them.

The tricky thing about antivirus software is that there are fake antivirus programs out there that pretend to protect you, but actually act as viruses themselves, inflicting your machine with alarms and annoyances and forcing you to buy “updates” that only make the problem worse.

If the software is Norton Antivirus from Symantec, McAfee VirusScan, or Kaspersky Internet Security, you know they’re legitimate and you’ll do well to buy the updates. You can also go to an antivirus software manufacturer’s website and buy a downloadable version.

You can get legitimate antivirus titles for free. Microsoft offers a free antivirus program called Microsoft Security Essentials, which looks good and heaven knows the price is right.

Wallace Wang is the bestselling author of several dozen computer books including Office For Dummies and Beginning Programming For Dummies. Besides writing computer books, Wallace also enjoys performing stand-up comedy just to do something creative that involves human beings as opposed to machines.