How to Use Excel’s ADDRESS Function

By: Ken Bluttman and
Updated: 01-31-2019
From The Book: Excel Formulas & Functions For Dummies

Explore Book Buy On Amazon
The Excel ADDRESS function takes a row number and a column number as arguments and returns a standard cell reference (cell address). For example, if you pass the row number 4 and the column number 3, the function returns C4. Excel’s ADDRESS function can return an absolute or relative reference in either of Excel's two reference formats. Before you get to the details, here’s a quick review of the differences between absolute and relative cell references: The following image shows a worksheet in which entering a formula with a relative cell reference causes a problem. Totals are the result of adding the tax to the amount. The tax is a percentage (0.075) for a 7.5 percent tax rate. This percentage is in cell C1 and is referenced by the formulas. The first formula that was entered is in cell C7 and looks like this: =B7*(1 + C1). 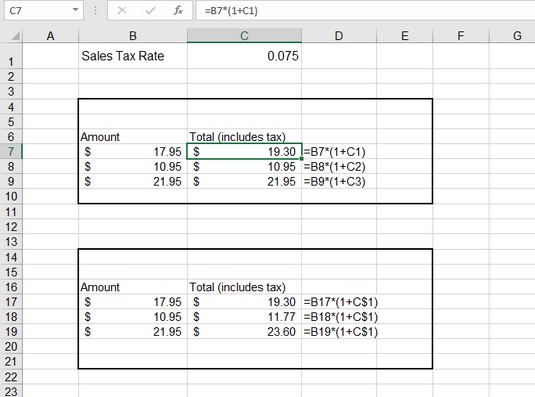 Changing a reference from relative to absolute.

The formula in cell C7 works correctly. It references cell C1 to calculate the total. But if you use the fill handle to copy the formula from cell C7 to cells C8 and C9, there's a problem. The reference to cell C1 changed to cell C2 and C3. Because these cells are empty, the results in cells C8 and C9 are incorrect; they are the same as the amounts to the left. (No tax is added.)

To better understand, column D displays the formulas that are in column C. When the formula in cell C7 was dragged down, the C1 reference changed to C2 in cell C8, and to C3 in cell C9. Often, this is what you want — for Excel to automatically change cell references when a formula is copied. But sometimes, as in this situation, it is not what you want. You need an absolute cell reference.

The formula in cell C17 is almost identical to the one in cell C7 except that the reference to cell C1 has been made row absolute by placing a dollar sign in front of the row number. The formula in cell C17 looks like this: =B17*(1 + C$1). When this formula was dragged down into C18 and C19, the reference was not adjusted but stayed pointing at cell C1. Note that in this example, only the row part of the reference is made absolute. That's all that is necessary. You could have made the reference completely absolute by doing this: =B17*(1 + $C$1). The result would be the same, but it's not required in this example.

Excel supports two cell reference styles: the good old A1 style and the R1C1 style. R1C1 style uses a numerical system for both the row and the column, such as this: R4C10. In this example, R4C10 means row 4 column 10.

To change the cell reference style, choose File  →    Options and check the R1C1 reference style in the Working with Formulas area on the Formulas tab. Using the R1C1 format also forces the columns on the worksheet to display as numbers instead of the lettering system. This is useful when you’re working with a large number of columns. For example, column CV positionally is the 100th column. Remembering 100 is easier than remembering CV.

To get back to the Excel ADDRESS function, it takes up to five arguments:

Only the first two arguments are required: the row number and column number being addressed. The function returns the specified reference as text. Use Excel's ADDRESS function this way: