Entering Assumptions in Your Financial Model

By: Danielle Stein Fairhurst and
Updated: 09-11-2017
From The Book: Financial Modeling in Excel For Dummies, 2nd Edition

The Assumptions worksheet already has places for your key business drivers — it’s up to you to input accurate and reasonable assumptions for the business.

In modeling, all input variables should be formatted consistently (usually with blue font or using Input Style, which can be found on the Home tab in the Styles section of the Ribbon). Then anyone using this model knows that she can make changes to any of the cells formatted in that way.

Based on your study of other cafes in the area (you’ve been drinking a lot of coffee the past few weeks, haven’t you?), you expect the following assumptions for your business’s revenue: These are your expectations for the business’s sales; they represent your base case revenue assumptions. You aren’t really sure whether you have the daily number of sales right — you’re just estimating — so you’ll adjust this number when you run the scenarios. You’ll address the best- and worst-case assumptions later on, after the base case is complete, so you can leave the cells in rows 3 and 4 blank for now.

Go to the Assumptions page, and enter the business sales. 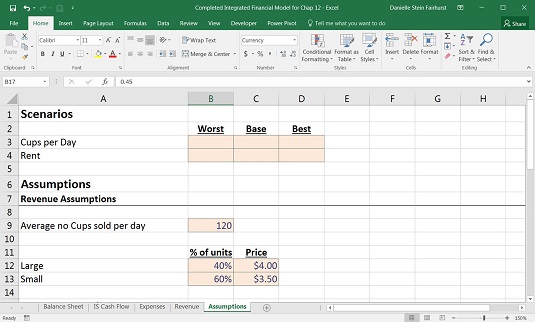 The model has already been formatted for you, but when you make your own models, be careful to format correctly, expressing percentage values as percentages and using dollar signs to show dollar values. One of the most common errors in financial modeling is confusing units, such as treating a number of units as a price. Proper formatting makes any report or model clearer and easier to read for the user. Pay particular attention to formatting when using percentages. If a cell is formatted as a percentage, any figure entered will automatically be converted to a fraction.

For example, if you enter the number 5 in any normal cell, the value is 5. But if the cell is formatted as a percentage, the number 5 will automatically be converted to a value of 0.05 (or 5 percent). This could potentially lead to incorrect calculations.

In your analysis, you’ve also researched the operating costs of running a cafe, which are the following: These are your expectations for the business’s costs; they represent your base case expense assumptions. 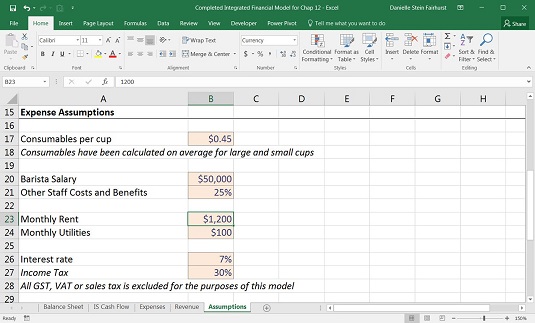 Finally, you also have some other assumptions regarding the number of business days you’ll be open per month and how busy your cafe will be throughout the year, so you need to apply some seasonality because this will affect your cash flow. Follow these steps: 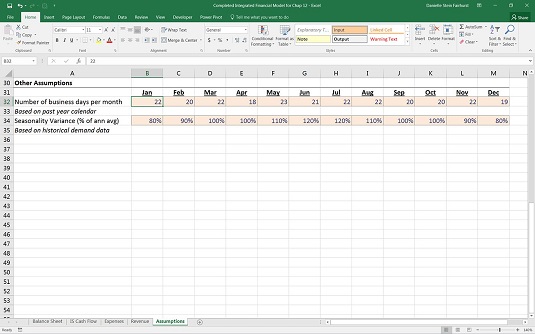 Models must be well documented and assumptions must be clearly stated. A properly documented model will not only help you and others follow it, but also help users if you’re no longer around when a change needs to be made to the model. Including sources is handy for when you or someone else wants to go back and check the validity of your assumptions. Document assumptions and sources as you build the model. Documenting as you go is much easier than having to go back and do it at the end. After all, a model is only as good as its assumptions!