By: David Karlins and
Updated: 08-22-2019
From The Book: Adobe Analytics For Dummies

Countless customers and professionals in the industry ask experts which analytics solution they like best. Instead of answering that question, let’s consider a more objective one: What are the strengths and limitations of Adobe Analytics and Google Analytics?

This focus has helped prospective buyers of data analytics solutions quickly map features and integrations to their requirements. And by comparing and contrasting the two, you will understand why your organization made the call to implement Adobe Analytics.

Surveying how Adobe Analytics stacks up against Google Analytics

Let’s start this comparison by focusing on Adobe Analytics because that’s the topic of this book. Adobe’s analytics solution is often thought of as the Ferrari in the industry — impressively powerful but costly. That analogy has some truth to it. But let’s break down some of the features unique to Adobe Analytics.

In terms of power, nary an analytics solution can top the Adobe capabilities that you'll be walking through in this book. The first key differentiator for Adobe is Analysis Workspace, the default engine in Adobe Analytics for analysis, visualization, curation, and sharing. Built with both the marketer and the analyst in mind, Analysis Workspace provides unlimited breakdowns, on-the-fly segmentation and calculated metrics, a slew of data visualization capabilities, and four key built-in, data-science-powered features.

Adobe has recently added to Analysis Workspace a much-needed component for attribution that allows almost all metrics to have one of ten attribution models that you can apply to almost any dimension in the platform.

In short, marketing attribution helps you understand how your customers and clients are interacting with your online presence and what they want in a way that makes possible highly focused and accurate marketing or service decisions. Attribution IQ in Analysis Workspace, for example, lets you add many new types of attribution models to freeform tables, visualizations, and calculated metrics. Attribution IQ is shown below. 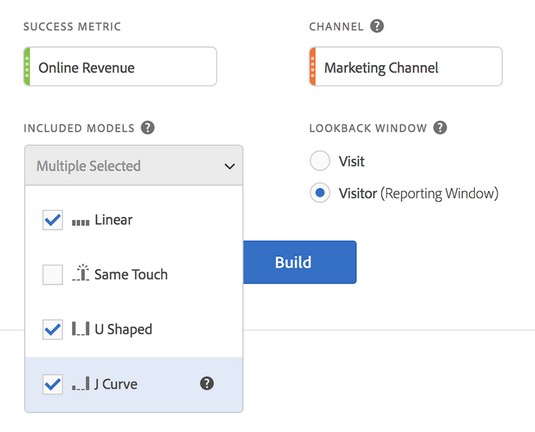 As of this writing, algorithmic and data-driven models require an upgrade to Adobe’s Data Workbench solution at significant cost.

Two huge differentiators for Adobe are tied to their customer journey visualizations: flow and fallout. Other vendors seem to fail to get the flexibility and ease of use right for these types of analyses, In addition, Adobe is primed to release Customer Journey Analytics, a feature focused on stitching visits and devices across devices based on logins or Adobe’s Device Co-op.

Adobe also has built-in data connectors with dozens of partners that allow for relatively seamless and often bidirectional integrations of datasets across email, search engine optimization (SEO), commerce, advertising platforms, and more. If these pre-built integrations aren’t good enough, Adobe recommends a custom integration via a number of options including the recently released Adobe Experience Platform.

The other big selling point of Adobe’s integrations comes from deep within their own Experience Cloud — integrations with other Adobe solutions. Adobe was the first company to have a bidirectional integration with an Analytics and Data Management Platform (DMP). DMPs are used for merging data from multiple datasets, building audiences from that merged data, and activating those audiences in advertising platforms.

Don’t worry. If that topic is too advanced, you should just know that marketers can define segments in Analytics that are then enriched by additional data sources in Audience Manager (Adobe’s DMP), and then share those segments back into Analytics for further analysis. Adobe also has quality integrations with Target (testing and personalization), Campaign (1:1 marketing campaign management), Experience Manager (content and asset management), and Ad Cloud (advertising bid optimization).

Adobe’s biggest missing feature may be a big one for you: integration with Google Ads. Adobe does have several ways of integrating with advertising data from their biggest analytics competitor, but none are as seamless or as complete as Google’s.

In addition, some people complain that Adobe’s solution is too difficult to use, but this opinion seems to be based on the Omniture interface (the program Adobe acquired that evolved into Adobe Analytics), which was, frankly, daunting. Analysis Workspace has removed these limitations and created unique ways to empower new users.

If you feel overwhelmed, check out these resources you can use to help you navigate Adobe Analytics.

Understanding how Google Analytics fits into the data analysis picture

Google has cornered the free analytics solution market, doing the entire industry a service by helping to drive a huge wave of businesspeople to start asking questions about their data. The free version of Google Analytics is a valuable and accessible tool for generating reports on who is coming to a website and how they are interacting with that site. It is not an enterprise-level tool for data analysis.

The focus here is on Google Analytics 360. Google released this for-pay solution several years ago. A significant differentiator and advantage of Google Analytics is its native integration with Google Ads. If advertising is your analytics raison d'être, you’re probably spending more of your budget and time in Google’s ad tools than any other tool and therefore will find Google’s ad integrations valuable. 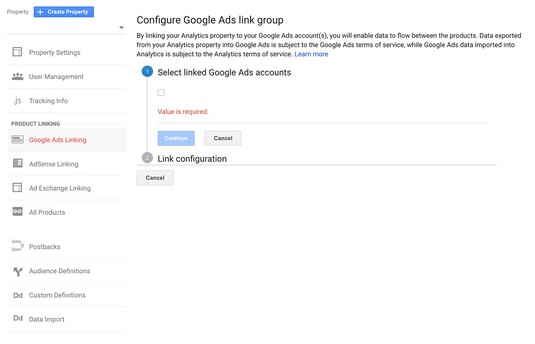 Calculated metrics in Google Analytics and Google Analytics 360 are limited to the four basic arithmetic operators (add, subtract, multiply, divide) and can be used only in custom reports and created only by administrators.

Some calculations are pre-built into reports, but they are often simple divisors of other metrics already in the report. Analysts often need more complex operators and functions, such as distinct/unique counts, means, medians, percentiles, and logical operators (if, then, and, or, greater than, and less than). The interface for creating a calculated metric in Google Analytics is shown below. 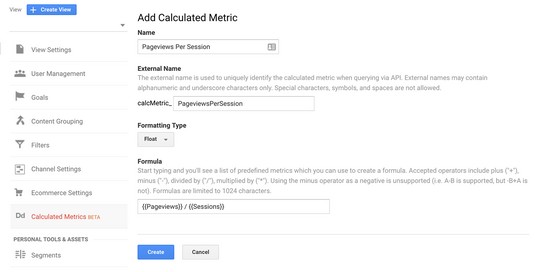 Another distinguishing feature of Google’s tool is integration with Google Cloud Platform (GCP). Advanced analysts and data scientists who are comfortable in SQL (Structured Query Language, a language for accessing and manipulating databases) will be able to run queries thanks to the integration of Google data into BigQuery, Google’s fast-moving SQL-based platform for complex analyses of multiple datasets filled with huge data.

The caveat or downside here is that accessing this data requires a high level of fluency with SQL to generate the kinds of reports that you can generate without SQL in Adobe Analytics.

Segment Overlap is the second report in Advanced Analysis. This report provides analysts with a Venn diagram of segments that show the percentage of users who share a segment. Finally, Google has expanded custom funnel capabilities in Advanced Analysis. Google Analytics 360 customers love the ability to create custom funnels on the fly, whereas non-360 customers have to create the funnel before data flows into it.

In Advanced Analysis, Google has expanded these custom funnels to max out at 10 funnel steps, doubling the maximum in Google Analytics. When compared to Adobe’s Analysis Workspace, Google’s Advanced Analysis tool is far less robust, but we’re excited to see what Google cooks up in future releases.

Evaluating plusses and minuses of Adobe Analytics and Google Analytics

As noted, Google gets high marks for their integration with other Google platforms. However, Google Analytics has only one significant non-Google integration, with Salesforce, so all other data sources require a custom setup via API.

Google Analytics evolved from, and retains significant evolutionary holdovers and limitations based on, its origin as a much simpler tool for reporting, as opposed to a full-fledged analytics tool. The limitations associated with calculated metric capabilities, dimensional breakdowns, and custom funnels may be debilitating to analysts who are unable or uninterested in using SQL.

The most significant shortcoming may be that Google Analytics, even the premium Analytics 360 solution, uses data sampling in its reports, so some reports may not show a complete view of visitor behavior. Similar to election polling, Google Analytics reports show data associated with a percentage of the full set of data (20 percent, for example) and then multiply that number by the total number of site visitors (by five, in this example).

Of course Google’s real sampling algorithm is more complicated than this but the end result is important: Data may provide you with different answers depending on how it is sliced. In Analytics 360, sampling minimums are increased in many reports.

In short, the free version of Google Analytics plays a valuable role in opening the door to data analysis for a wide range of small-scale developers, including individual website designers who create their sites with WordPress, Wix, or other tools. It allows them to generate basic reports and perform a limited array of essentially predefined analyses.

The less widely known and implemented Google Analytics 360, with the Advanced Analysis interface, adds a few features that overlap in some ways with those in Adobe Analytics. Limitations include the need for SQL programming to get the most from the collected data and, significantly, data accuracy issues. Google Analytics has the advantage of providing the most direct path to data analysis with a focus on advertising and publishing.

Each of these vendors, including MixPanel, Heap, Amplitude, and Localytics, provides more focused but fewer features than Google Analytics 360 or Adobe Analytics. None have aimed to compete with the more complete cloud offerings in Google Marketing Platform or Adobe Experience Cloud.

Eric Matisoff is Adobe's global evangelist for their Analytics solution. He appears regularly at tech and industry events to speak about Adobe products and their potential. David Karlins has written 40 books on digital communications and design, including HTML 5 & CSS 3 For Dummies.