Many new Twitter users want to know what the rules are, or whether Twitter has standard protocol and etiquette. Beyond Twitter's standard Terms of Service, Twitter etiquette is simple: Be genuine and non-deceptive and provide value. Otherwise, just use Twitter how it suits you.

Beyond the simple regulations, you can't really use Twitter in a right or wrong way because no two people use it for exactly the same reasons. Although users love Twitter's largely rule-free nature, some generally accepted behaviors have evolved over time. You can ease your transition into the culture of Twitter by getting familiar with these behaviors. 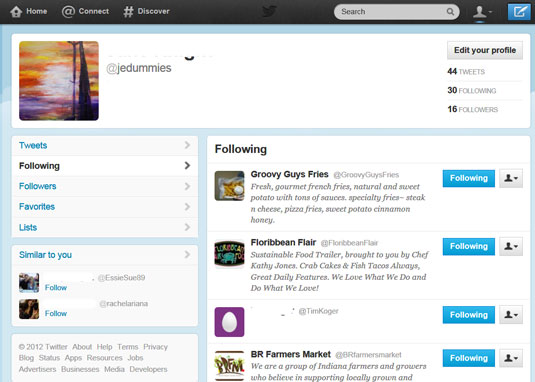 Be polite on Twitter for the most part, but no more or less so than you're expected to be in the real world — just keep in mind that Twitter is a public forum.

You may encounter confusing, even conflicting, advice and back-seat tweeting from the handful of people on Twitter who aren't comfortable without rules. Don't take them too seriously; Twitter just isn't that rigid.

Some Twitter users are considered noisy because they tweet so much, whereas others can come across as standoffish because they don't tweet frequently. A good rule when you're starting out is to post at least four or five tweets per day. You'll most likely find yourself tweeting much more often than that, but if you aren't yet fully comfortable with it, use that number to get started.

For example, for every link of your own that you place on Twitter, send out at least five tweets that inform, engage, and converse. If conversation and engagement are your aim, you definitely want to keep a human voice in your Twitter stream at all times.

On Twitter, engagement is the name of the game. Whether you use Twitter for business or fun, you don't just want to sit back and watch the stream flow by — you want to genuinely interact with people.

Don't be shy about finding people who share your interests, even if you don't know them (yet). Use Twitter Search to look for some of the most obscure keywords related to your work, hobbies, or passions. Then click through to the profiles of the people who wrote the tweets you find.

Your early days on Twitter will probably be pretty quiet when it comes to replies and conversation. All those twitterers are just getting to know you, after all. Don't worry; after a few of your tweets appear in the timeline and you add a few contacts to your network, people will begin to notice you.

Laura Fitton was one of the first marketers to discover the value of Twitter for businesses and society. She founded the Twitter app store oneforty.com and sold it to HubSpot. Fitton served as inbound marketing evangelist for Hubspot for eight years. Anum Hussain is a producer of Desi Standard Time, a podcast focused on Bollywood films, South Asian cinema and media. A social media expert, she is also coauthor of Twitter For Dummies, 3rd Edition. Brittany Leaning has written about social media strategy for HubSpot’s 1.6 million readers and managed accounts for several well-known brands.