One of the best ways to gain a following on Twitter is by posting engaging media such as photos, Vine videos, long-form videos from YouTube or Vimeo, or even PowerPoint presentations on Slideshare. These visuals show up much bigger in the Twitter feed, compared to a text-based Tweet, and jump out and catch people's eyes.

If you'd like a little inspiration for how you can take advantage of visual content on Twitter, take a look at the following ten examples of people who are doing it well.

Ellen DeGeneres (@TheEllenShow) is an actress, writer, and producer, but is most commonly known for her TV show, The Ellen Show, where she brings in all sorts of celebrities to hear about their lives and have a little fun. Some segments include secret surprises, or even pranks.

DeGeneres likes to have a little too much fun, and her Twitter account reflects that. The image below is a perfect example of her weekly #ThrowbackThursday, where she posts a photo from the past. If you'd like a laugh yourself, see all her photos and videos on her Twitter. 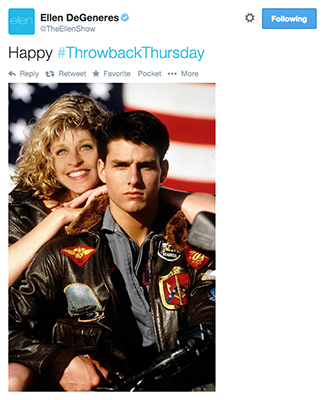 BatDad (@BatDadBlake) is a Vine-based superhero who became internet-famous for his humorous videos. These 6-second clips feature him in a Batman mask asking his kids to behave and do their chores.

As you scroll through his Twitter account, you'll experience a day in the life of a dad with four children who's just trying to have a little fun with such a great responsibility. See more of BatDad's Vine videos, which even include new brand-sponsored videos. 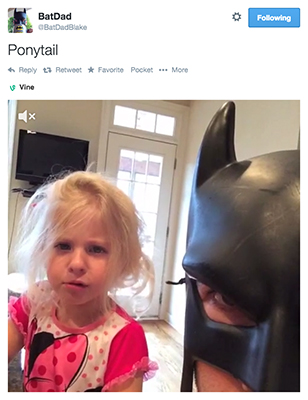 Olafur Eliasson (@olafureliasson) is a Danish-Icelandic artist known for large-scale installation art. He uses Twitter as a portfolio to build awareness about his art and exhibits through photographs.

This photo is an example of his Riverbed exhibit at the Louisiana Modern Museum of Art, showcasing the transition between inside and outside, and drawing attention to what nature looks like in a staged environment. 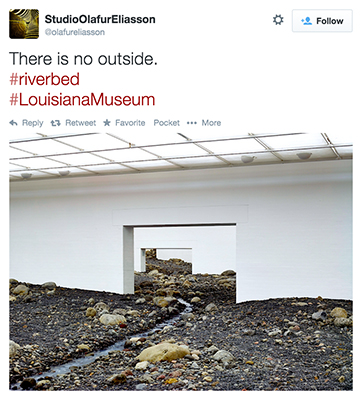 Scott Harrison (@ScottHarrison) is the founder and CEO of charity: water (@charitywater), a New York City-based charity focused on bringing clean water to developing countries. The majority of Harrison's visual content on Twitter includes stunning photos of people's lives and stories, drilling wells, and before and after photos of the villages' water supply.

However, the photo featured here is a rare treat. Harrison recently had a baby and is using his photography skills to put him on display and prove that literally anyone can raise money for clean drinking water. 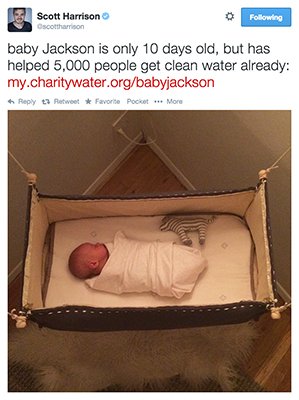 Reid Wiseman (@astro_reid) is a NASA astronaut, currently living on and serving as a flight engineer for the International Space Station (ISS) for Expedition 41. Because the ISS is in low Earth orbit, Wiseman is able to take some unbelievable photos of planet Earth, including views of sunsets and mountain ranges, plus remarkable manmade cityscapes. If you want to experience something literally "out of this world," you should take a look at Wiseman's photos and videos. 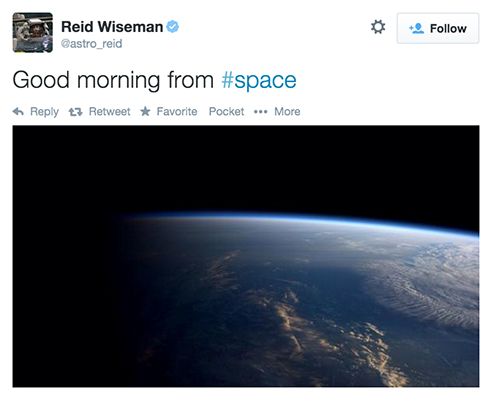 Stephanie Izard (@StephAndTheGoat) was the winner of the fourth season of Bravo's Top Chef and has gained quite a following from her accomplishments. Izard tweets photos of her restaurant, Little Goat, and all her food experiments and menu adventures. This account will make you quite hungry, but it's a great account to follow if you're a food enthusiast. 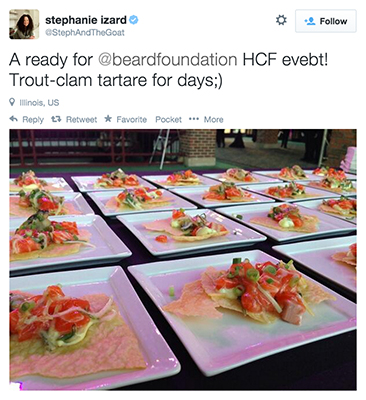 Jimmy Kimmel (@JimmyKimmel) is an actor, comedian, producer, and screenwriter, but he is most commonly known for his TV hosting abilities on Jimmy Kimmel Live! During this show, Kimmel runs segments such as #MeanTweets, where celebrities read mean Tweets about themselves out loud for all to hear. After the show, Kimmel tweets a video of the segment for others to view and share.

In addition to video clips after each show, Kimmel also posts previews before certain episodes, such as the image featured below. This entices people to tune in to the show and plays off people's curiosity. 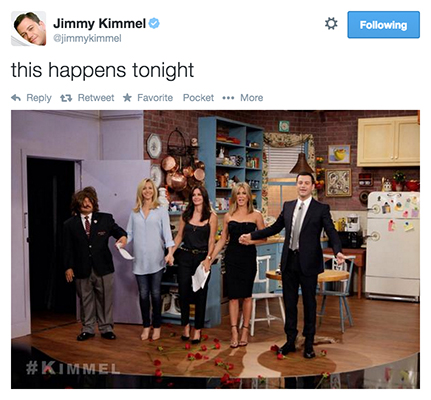 Since 2008, U.S. President Barack Obama (@BarackObama) has leveraged Twitter to gain attention from younger and more tech-savvy Americans. One of his most famous Tweets was just after the 2012 election. In this "Four more years" photo below, he chose to play off people's emotions and really showcase what a powerful and memorable time this was.

However, on his Twitter account you'll also see data-filled graphs about the current state of the economy and other issues. Take a look at Obama's photos and videos here to see which you relate to more. 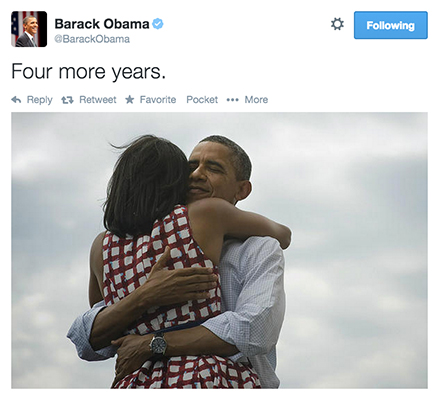 Meagan Cignoli (@MeaganCignoli), a digital entrepreneur, creates Vine and Instagram videos professionally for brands. These pieces of art are featured all over her Twitter account, which has turned Twitter into a great portfolio piece for her.

The following image is part of a short, stop-action animation that artistically shows the process of decorating cookies and cupcakes. Hop over to Cignoli's Twitter account to see her remarkable Vine videos. 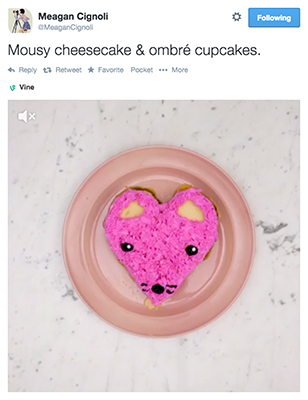 Tom O'Keefe (@BostonTweet) uses Twitter to showcase different restaurants, secret spots, news updates, and events happening around Boston. Some of his photos include pictures of food with a 140-character description of the meal, restaurant, and location.

Other photos include various views of Boston, or on-the-spot findings such as #AllstonChristmas, which occurs when renters move into new apartments and leave their old belongings on the front yard. In the Tweet below, O'Keefe captured Boston's ALS Ice Bucket Challenge (an act to raise awareness for the disease Amyotrophic Lateral Sclerosis) in a Vine video and challenged New York City, Chicago, and Los Angeles to participate as well. 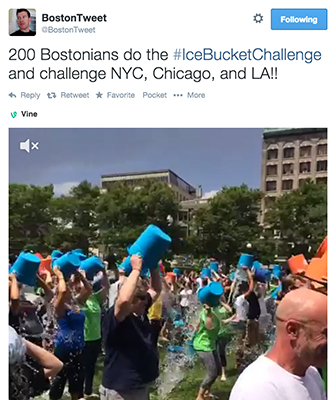 Now that you've seen examples of ten Twitter users who are using visual content well, you can go off and try these ideas out for yourself! Whether you're an artist, chef, or even an astronaut, you can take advantage of photos and videos to develop a following and get more attention put on your work.