What Is Discord Server? 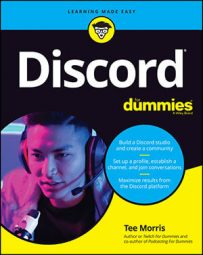 Explore Book Buy On Amazon
Perhaps the trickiest thing to do right off the bat is define Discord. On the surface, it looks and sounds like Skype on steroids, but it’s a robust, stable communications platform available as a browser application, a stand-alone desktop application, and a mobile app for both smartphones and tablets. Discord offers the following features: Discord provides gamers, streamers, and many other creative individuals and organizations an all-encompassing platform for topic-specific chat streams, private audio channels and open public chats, interviews for podcasts and streams, and much more.

One of many reasons this platform is so closely associated with gaming is due in part to its founder, Jason Citron. Citron was the founder of OpenFeint, a social gaming platform for mobile games, and Hammer & Chisel, a game development studio. Being a gamer himself, Citron noted problems with available options providing real-time game comms. His development team introduced Discord in May 2015 to Reddit communities, where it gained popularity with eSports gamers and Twitch.tv hosts and took off from there. Within its first year, Discord was hailed by PC Gamer as the best VoIP service available, praising its ease of use and its stability.

Oh, and Discord costs now what it did when it was introduced: free.

Discord stands apart from other game comms solutions — and for many professionals reliant on using the Internet for communications — for its stability, audio quality, video quality, and ease of use. It may seem a little intimidating when you first launch it, but setup and use are incredibly easy.

Welcome to a look inside my brain when I first started streaming — creating content live online through a service like Twitch, Mixer, or YouTube—and I was asked, “So what’s your Discord server?”

Are you kidding? I have to know this thing called Discord if I want to know Twitch? 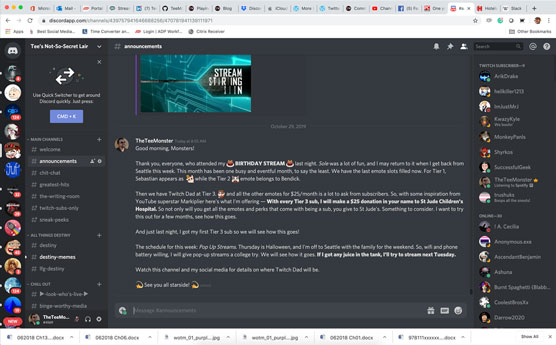 Welcome to Discord, a Swiss Army knife of communications for you and your team.

No, Discord is not necessarily a necessity for streaming, but if you want to build a community, if you want to extend your reach as a content creator, and if you want to level up your online communications game, yes, you will need Discord.

So, What Exactly Is VoIP?

All right, maybe learning something new won’t be so bad if you have a good reason for picking up yet another platform. That is a sound reason to get behind taking time to traverse the learning curve, so where do you begin with Discord? Or where do you begin your serious look at why you need yet one more platform added to your growing palette of applications?

So let’s step back a bit and talk about what is at the heart of Discord: audio chat. Discord is one of many apps taking advantage of Voice over Internet Protocol (VoIP), a method commonly used for the delivery of media communications (audio, video, and data files) through online connections using audio and video codecs (formats used for compressing a lot of data into order to make it manageable for exchange). Think of how the JPEG format takes a huge image file and makes it only a few megabytes. Codecs are similar to that. Instead of data being transmitted over circuit-switched network, digital data is transmitted over a packet-switched network: the Internet.

Perhaps the biggest name of early VoIP that changed the way the world communicated was Skype, offering free calls anywhere internationally by using closed networks for private user bases. The Danish software first reached the public in the summer of 2003. Provided you have broadband Internet, Skype offers up audio and video calls of better quality than standard telephone connections. Along with VoIP, a handy chat function is included for the exchange of data files. 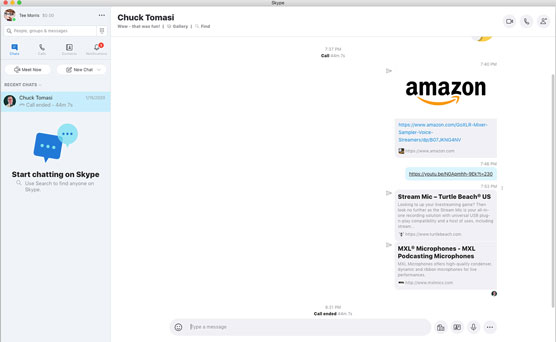 Skype brought free international communications to everyone around the world with a broadband Internet connection.

Here’s where things start to get a little dicey with VoIP. While the audio and video quality of these calls was unparalleled, a lot of factors would come into play, beginning with the quality of the broadband Internet. Not all broadband is created equal, and in rural areas and developing nations, dial-up was still the way to connect in 2003 and later. Even if broadband is up and running on both the sending and receiving ends of a VoIP call, sending files during a call could disrupt or outright end a call on account of the size of the files being exchanged, the upload/download limitations of the broadband connection, and the amount of traffic on both parties’ end.

Then there’s security. Each point of a VoIP connection creates a potential vulnerability, as firewalls, if not configured properly, can block incoming and outgoing calls. Additionally, distributed denial-of-service attacks can easily take down VoIP systems, rendering them busy. And these are just two of many vulnerabilities that VoIP can bring to a professional or home network. Free global communication is a very cool thing, but it also comes with a lot of compromising possibilities. So while an improvement over your usual hard-wired telephone calls, VoIP is hardly perfect.

So, What Exactly Is In-Game Chat?

Now as VoIP has its checkered reputation, it did introduce the idea of open communications within online games. The concept of built-in chat options, a feature that is usually expected in team-oriented games, be they MMOs (massively multiplayer online games), FPS (first person shooters), RPGs (role playing games), or some other flavor of video game with communications between team members, completely changed how we play on our chosen platforms. In-game chat was introduced in 2006 with Nintendo’s Metroid Prime Hunters, offering gamers real-time audio through the Nintendo DS’s built-in microphone. In-game chat was also offered that year with Nintendo’s Pokémon: Diamond and Pearl.

Today, in-game chat is everywhere. Bungie’s Destiny offers Fireteam Chat to keep Guardians connected when you lead a raid team into the Garden of Salvation. Epic Games’ juggernaut Fortnite also comes with native chat, allowing you to tell that 10-year-old who just fragged you the best place to store their Legendary pump shotgun. Even cutthroat pirates can make new friends through in-game chat in Rare Studios’ Sea of Thieves, pictured here. 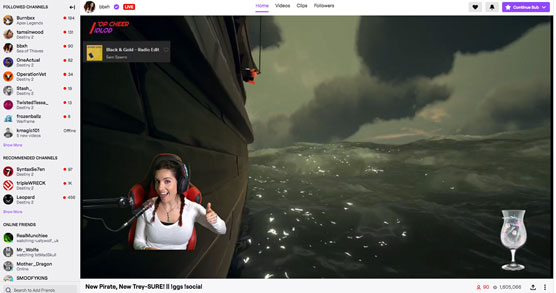 Thanks to in-game chat, streamer BBXH can give the order to raise the main sail, drop anchor, and give a sloop to starboard a broadside in Sea of Thieves.

Then you have Xbox Live and PlayStation Network. Consoles are offering their own audio channels to give their gamers a more social experience. Can’t game with your friends in Call of Duty: Modern Warfare, as you are enjoying an adrenaline rush from Dead by Daylight? No worries. Sign on to Xbox LIVE or PSN and enjoy some casual hangout time with your crew. So long as you are logged into your console’s respective network, you can chat with your friends, build your network to include others, and swap media ranging from screen captures to game play. And don’t worry about not having the right gear straight away. Consoles will offer you the basics (such as an earbud with a mic and an audio jack in your controller) so you can start chatting straight out of the box.

In-game chat has become so prevalent, it is now a feature expected by gamers. It’s the ability to connect that appeals to players, as the gaming experience becomes something more social and more inclusive. From my own experience with in-game chat, it’s always fun to be able to work with fellow gamers in a tight scenario (be it PvP or PvE) and execute audibles. Feels good, man. However, the quality of the chat varies from game to game. Destiny’s native Fireteam Chat, for example, is barely better than the audio quality of a hard-wired telephone call. Another limitation of native in-game chat is that it is native to that game, so if you want to just hang out with your mates while gaming, you have to be in that particular game.

Console chat tends to have better audio quality as opposed to native in-game chat, provided that the network you’re on is having a good hair day. If someone in your party is suffering from connection issues, their audio will be spotty at best, popping and locking harder than a Cirque du Soleil performer. Sometimes, incompatibility in gaming gear (microphones, headsets, and so on) may also complicate things. A common audio issue on PSN, for example, is a Network Address Translation (NAT) error, which can occur when network settings on an individual’s console are not set properly or a firewall is active. Troubleshooting can be something of a challenge and may not always be a one-solution-fits-all kind of thing. And if Xbox LIVE or PSN is offline? No soup for you.

VoIP is free and able to connect you with friends everywhere in the world, but not without a fair share of problems ranging from spotty reception to security vulnerabilities. Meanwhile, game and console developers offer their own brands of in-game communications, but if the audio quality doesn’t make you suffer, connection issues will.