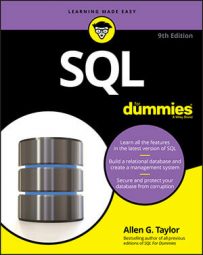 Explore Book Buy On Amazon
You can use the LIKE SQL predicate to compare two character strings for a partial match. Partial matches are valuable if you don’t know the exact form of the string for which you’re searching. You can also use partial matches to retrieve multiple rows that contain similar strings in one of the table’s columns.

The NOT LIKE predicate retrieves all rows that don’t satisfy a partial match, including one or more wildcard characters, as in the following example: This example returns all the rows in the table for which the phone number starts with something other than 503.