How to Change HTML with JavaScript 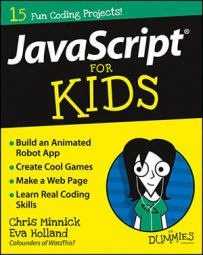 By using JavaScript, you can change any part of an HTML document in response to input from the person browsing the page. Before you get started, take a look at a couple of concepts. The first is a method called getElementById.

A method is an action that's done to or by an object in a JavaScript program.

getElementById is probably the easiest and most commonly used way for JavaScript programmers to work directly with HTML. Its purpose is to locate an individual element in a document so that you can change it, delete it, or add some­thing to it.

To use getElementById, first make sure that the element you want to select has an id attribute. Then just use the following formula to locate that element:

For example, to select an element with an id value of myName, you can use this code:

Getting what's inside an element with innerHTML

When you have an element, the next logical thing to do is to make a change to it.

innerHTML is a property of every element. It tells you what's between the starting and ending tags of the element, and it also lets you set the contents of the element.

For example, say that you have an element like the following:

You can select the paragraph and then change the value of its innerHTML with the following command:

Now that you know a little about getElementById and innerHTML, take a look at an HTML home page. You'll add a button and JavaScript code to your home page to let you change your list of favorite things with the click of a button.

If you did everything correctly, you should now be able to click the button, enter new text into each of the three prompt windows, and then see the new items instead of the three original list items, as shown here. 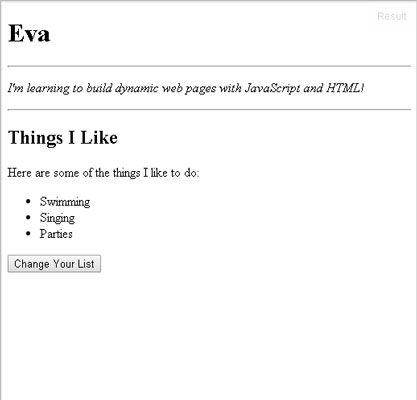