Programming with Java: Public Classes and Default-Access Classes in Your Android App

By: Barry A. Burd and
Updated: 01-13-2017
From The Book: Java Programming for Android Developers For Dummies

Explore Book Buy On Amazon
A good chunk of code in your Android app will likely begin with the word public. When a class is public, any program in any package can use the code (or at least some of the code) inside that class. If a class isn't public, then for a program to use the code inside that class, the program must be inside the same package as the class.

What Is a Paragraph?

Making a Paragraph with Code in the Same Package

Making a Paragraph with Code in Another Package

The code in the last set isn't in the same com.allyourcode.wordprocessor package. For that reason, the use of names like Paragraph and leftIndent aren't legal, even if they are in the same Android Studio project. When you type the code from all of the sets above into the Android Studio editor, you see a red, blotchy mess for the last set. 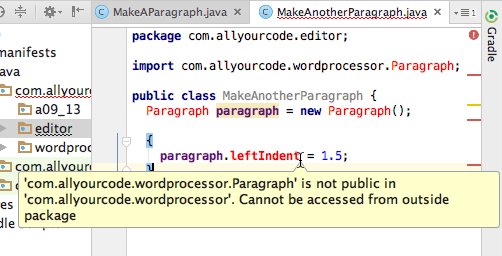 Errors in the code.

Because of the file-naming rule, you can't declare more than one public class in a .java file.