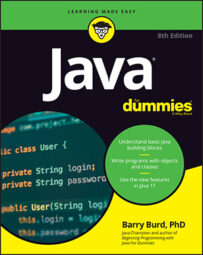 Explore Book Buy On Amazon
The words int and double are examples of primitive types (also known as simple types) in Java. The Java language has exactly eight primitive types. As a newcomer to Java, you can pretty much ignore all but four of these types. (As programming languages go, Java is nice and compact that way.)

The types that you shouldn’t ignore are int, double, char, and boolean.

Several decades ago, people thought computers existed only for doing big number-crunching calculations. Nowadays, nobody thinks that way. So, if you haven’t been in a cryogenic freezing chamber for the past 20 years, you know that computers store letters, punctuation symbols, and other characters.

The Java type that’s used to store characters is called char. The code below has a simple program that uses the char type. This image shows the output of the program in the code below.

An exciting run of the program of below as it appears in the Eclipse Console view.

In a Java program, single quote marks surround the letter in a char literal.

If you’re tempted to write the following statement,

char myLittleChars = 'barry'; //Don't do this

please resist the temptation. You can’t store more than one letter at a time in a char variable, and you can’t put more than one letter between a pair of single quotes. If you’re trying to store words or sentences (not just single letters), you need to use something called a String.

If you’re used to writing programs in other languages, you may be aware of something called ASCII character encoding. Most languages use ASCII; Java uses Unicode. In the old ASCII representation, each character takes up only 8 bits, but in Unicode, each character takes up 8, 16, or 32 bits. Whereas ASCII stores the letters of the Roman (English) alphabet, Unicode has room for characters from most of the world’s commonly spoken languages.

The only problem is that some of the Java API methods are geared specially toward 16-bit Unicode. Occasionally, this bites you in the back (or it bytes you in the back, as the case may be). If you’re using a method to write Hello on the screen and H e l l o shows up instead, check the method’s documentation for mention of Unicode characters.

A variable of type boolean stores one of two values: true or false. The code below demonstrates the use of a boolean variable. This image shows the output of the program in the code below.

System.out.println("You can fit all ten of the");

At this point, it pays to be fussy about terminology. Any part of a Java program that has a value is an expression. If you write

Any part of a Java program that has a value is an expression.