Unlike audio, which doesn’t actually require much (or any) space on the screen, video requires an onscreen frame, as well as more sophisticated and more numerous controls. That’s why although the two markup elements are similar, video comes with considerably more baggage, even though the basic structure of the element remains the same:

Here the src attribute points to the video file you’d like to have played back. It specifies the name of the video object file for playback and must be a valid URI. Example: src="video.ogg".

The list of control attributes for video is considerably longer and a bit more complicated, too:

The following markup displays a video snippet from Wikipedia:

The figure shows what this page inside a properly constructed HTML file with some additional text and information looks like onscreen in Chrome, just after the video concludes playback.”? The control bar for video is nearly identical to the control bar for audio.

The difference is that the video control bar has a frame control at the far right. Please note also that alternatives for video playback work the same as they do for audio feedback, so you can stack your preferred player first for HTML5 browsers to use if they can, followed by other players in whatever order you prefer. 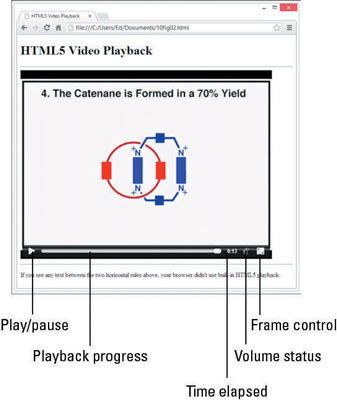