How to Display a Meter Bar on Your Web Page

The HTML5 element lets you display a meter bar for various counters that you might manage over time to show readings for various metrics. The element includes these numerical attributes, whose values may be integers (that is, whole numbers) or decimal numbers:

Here’s a fully tricked-out markup example, shown in the figure displayed in Chrome:

The figure shows the meter in the context of a complete HTML file, with some use of CSS to set off the meter display. The meter’s current value falls just below the optimal halfway mark. 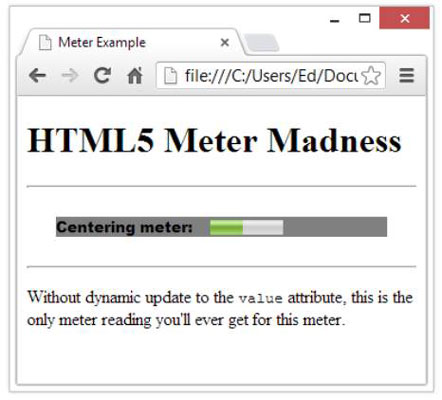 The high, low, and optimum attributes as well as the text enclosed between the opening and closing tags do not appear in the browser display of the meter. It’s probably best to think of this information as a kind of built-in documentation to help explain how the meter works.

To see and play around with meter markup (and value settings), visit Quackit.com.

For a nice demo of a meter at work (as you type into a text box, the character count goes up and the green meter bar gets longer), visit JSFIDDLE.

The following is a snippet of HTML markup that shows three different meter bars: one for storage space consumption, one for voter turnout, and one for tickets sold. Don’t scratch your head too much about it: It’s just a contrived example.