How to Create Headings in HTML5

Headings break a document into sections. Most books use headings and subheadings to divide each chapter into sections, for example, and you can do the same with your web page. Headings

When used in this context, n means the number of the heading level you want to create. For example, to create a first-level heading, you would substitute the number 1 for n and would add

to your page, for a second-level heading, add

Every browser has a different way of displaying heading levels.

Most graphical browsers use a distinctive size and typeface for headings:

The following snippet of HTML markup shows all six headings at work:

The figure shows the headings in the HTML page as rendered in a browser. 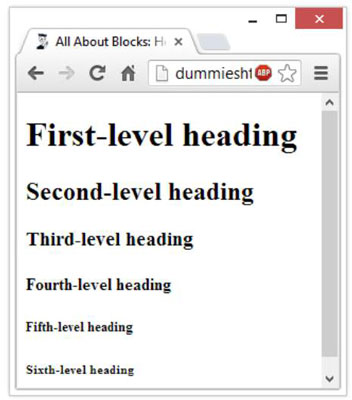 Use CSS to control how headings look, including color, size, spacing, and alignment.

By default, most browsers use Times Roman fonts for headings. The font size decreases as the heading level increases. (Default sizes for first- through sixth-level headings are, respectively, 24-, 18-, 14-, 12-, 10-, and 8-point font.) You can override any of this formatting by using CSS.