How to Build Image Maps in HTML5

Web pages often use images for navigation. They’re prettier than plain-text links, and you can add both form and function on your page with one element. When you use an

element with an anchor element to create a linking image, you can attach only one link to that image. To create a larger image that connects links to different regions on the page, you need an image map.

To create an image map, you need two things:

You use two elements and a collection of attributes to define the image map:

The figure shows how a browser displays this markup.

When the mouse sits over a region in the map, the cursor turns into a pointing hand (just as it changes over any other hyperlink). So take advantage of the title text to include useful information about the link and to make the map more accessible to the visually impaired. 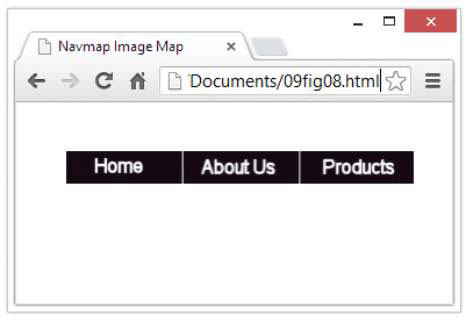 A common use for image maps is to turn maps of places (states, countries, and such) into linkable maps. Here are some online resources you can use:

Creating image maps by hand can be tricky. Use an image editor to identify each point in your map and then create the proper markup for it. Most HTML tools include utilities to help you make image maps. If you take advantage of such a tool, you can create image maps quickly and with few errors.

Exercise caution when using image maps. If you’re creating a visual aid (something like a map with links to different countries shown therein, for example), using an image map makes perfect sense. On the other hand, you should never use a graphic with image maps for your main navigation. (Well, you could, but you wouldn’t like the results!)

Always use HTML and CSS for the main website navigation, or if you must use a graphical image map, include a text-based alternative along with that map so that visually impaired site visitors can also navigate by using the alternative controls instead.

In general, the best thing for navigation is to use text for button labels and to let CSS handle the work involved in making buttons look good.