How to Form DevOps Teams in Your Organization

Explore Book Buy On Amazon
DevOps has no ideal organizational structure. Like everything in tech, the “right” answer concerning your company’s structure depends on your unique situation: your current team, your plans for growth, your team’s size, your team’s available skill sets, your product, and on and on.

Aligning your DevOps team’s vision should be your first mission. Only after you’ve removed the low-hanging fruit of obvious friction between people should you begin rearranging teams. Even then, allow some flexibility.

If you approach a reorganization with openness and flexibility, you send the message that you’re willing to listen and give your team autonomy — a basic tenet of DevOps.

You may already have a Python or Go developer who’s passionate and curious about infrastructure and configuration management. Maybe that person can switch into a more ops-focused role in your new organization. Put yourself in that person’s shoes. Wouldn’t you be loyal to an organization that took a risk on you? Wouldn’t you be excited to work hard? And that excitement is contagious.

Here, you learn how to align the teams you already have in place, dedicate a team to DevOps practices, and create cross-functional teams — all approaches from which you can choose to orient your teams toward DevOps.

You can choose one approach and allow it to evolve from there. Don’t feel that this decision is permanent and unmovable. DevOps focuses on rapid iteration and continual improvement and that’s the prime benefit of this methodology. That philosophy applies to teams as well.

In this approach, you create strong collaboration between your traditional development and operations teams. The teams remain functional in nature — one focused on ops, one focused on code. But their incentives are aligned. They will grow to trust each other and work as two teams yoked together.

For smaller engineering organizations, aligning functional teams is a solid choice. Even as a first step, this alignment can reinforce the positive changes you’ve made so far. You typically start the alignment by taking the time to build rapport. Ensure that each person on both teams not only intellectually understands the other team’s role and constraints but also empathizes with the pain points.

For this approach, it’s a good idea to promote a policy of “You build it, you support it.” This policy means that everyone — developer and operations person alike —participates in your on-call rotation.

This participation allows developers to start understanding the frustrations of being called in the middle of the night and struggling while foggy-eyed and caffeine-deprived to fix a bug that’s impacting customers. Operations folks also begin to trust your developers’ commitment to their work. Even this small change builds an extraordinary amount of trust.

A word of caution: If developers fight hard against being on call, a larger problem is at play in your organization. The pushback is not uncommon because being on call is wildly different from their normal day-to-day responsibilities. The pushback often comes from a place of discomfort and fear. You can help mitigate this reaction by addressing the fact that your developers may not know what to do the first few times they’re on call.

They may not be familiar with the infrastructure, and that’s okay. Encourage them to escalate the incident and page someone with more experience. Finally, create a runbook with common alerts and what actions to take. Providing this resource will help to assuage some fear until they begin to get the hang of things.

Another tactic to help spur collaboration to form a more cohesive DevOps team is to introduce a day of shadowing, with each team “trading” a colleague. The traded person simply shadows someone else on the team, sits at their desk (or in their area), and assists in their day-to-day responsibilities. They may help with work, discuss problems as a team (pair programming), and learn more about the system from a different point of view. This style of teaching isn’t prescriptive.

Instead, it lends itself to curiosity and building trust. Colleagues should feel free to ask questions — even the “stupid” variety — and learn freely. No performance expectations exist. The time should be spent simply getting to know each other and appreciating each other’s work. Any productive output is a bonus!

In this alignment approach, both teams absolutely must be involved in the planning, architecture, and development processes. They must share responsibilities and accountability throughout the entire development life cycle.

A dedicated DevOps team is more an evolution of the Sys Admin than a true DevOps team. It is an operations team with a mix of skill sets. Perhaps some engineers are familiar with configuration management, others IaC (infrastructure as code) and perhaps others are experts in containers or cloud native infrastructure or CI/CD (continuous integration and continuous delivery/development).

If you think that putting a group of humans into an official team is enough to break down silos, you’re mistaken. Humans are more complex than spreadsheets. Hierarchy doesn’t mean anything if your silos have entered a phase in which they are unhealthy and tribal. In toxic cultures, a strongman style of leadership can emerge that is almost always followed by people taking sides. If you see this on your own team, you have work to do.

Although any approach may work for your team, this dedicated team approach is the one you should think through the most. The greatest disadvantage of a dedicated DevOps team is that it easily becomes a continuation of traditional engineering teams without acknowledging the need to align teams, reduce silos, and remove friction. The risks of continuing friction (or creating more) are high in this approach. Tread carefully to ensure you’re choosing this team organization for a specific reason.

The benefits of this DevOps approach is having a dedicated team to address major infrastructure changes or adjustments. If you’re struggling with operations-centered issues that are slowing down your deployments or causing site reliability concerns, this might be a good approach — even temporarily.

A dedicated team if you’re planning on moving a legacy application to the cloud. But rather than calling this team a DevOps team, you might try labeling it an automation team.

This dedicated group of engineers can focus completely on ensuring that you’ve set up the correct infrastructure and automation tools. You can then proceed with confidence that your application will land in the cloud without major disruption. Still, this approach is temporary. If you keep the team isolated for too long, you risk going down a slippery slope from rapid growth to embedded silo.

A cross-functional team is a team formed around a single product focus. Rather than have separate teams for development, user interface and user experience (UI/UX), quality assurance (QA), and operations, you combine people from each of these teams.

It’s a good idea to have, at a minimum, one operations person per team. Do not ask an operations person to split their responsibilities between two teams. This scenario is unfair to them and will quickly create friction between the two product teams. Give your engineers the privilege of being able to focus and dig deep into their work.

If you’re organization is still small or in the startup phase, you can think of your entire engineering organization as a cross-functional team. Keep it small and focused. When you begin to approach having 10–12 people, start thinking about how you can reorganize engineers.

The image below shows what your cross-functional teams could look like. But keep in mind that their composition varies from team to team and from organization to organization. Some products have a strong design focus, which means that you may have multiple designers in each team. Other products are technical ones designed for engineers who don’t care much for aesthetics. Teams for that kind of product may have one designer — or none at all. 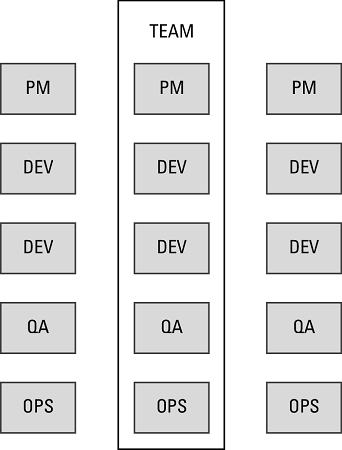 If your organization is large enough, you can certainly create multiple teams using different DevOps ideas and approaches. Remember that your organization is unique. Feel empowered to make decisions based on your current circumstances and adjust from there. Here are some possible combinations of various types of product teams.

The downside of a cross-functional product team is that engineers lose the camaraderie of engineers with their same skill sets and passions. Having a group of like-minded individuals with whom you can socialize and from whom you can learn is an important aspect of job satisfaction. Check out a solution to this issue below.

As shown below, you can give your engineers dedicated work time to spend with their tribes. You can do something as generous as paying for lunch once every week so that they can get together and talk. Or you might provide 10–20 percent of work time for them to work on projects as a tribe. Either way, you need your engineers to stay sharp.

Tribes share industry knowledge, provide sound feedback, and support career growth. Provide time for your engineers to learn from people with whom they share education, experience, and goals. This time provides a safe place where they can relax and feel at home. 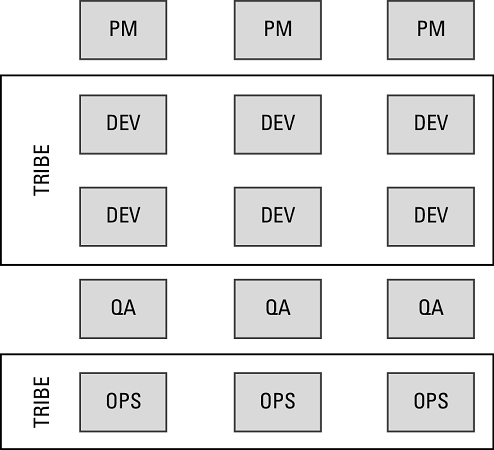 No amount of perfect finagling will overcome the shortfalls of a bad organizational culture. But if you’ve paid attention so far and made the appropriate strides, the next step is to form teams that reinforce the cultural ideals you’ve already put in place.