Hackathons and Other Networking Events for GitHub Software Developers 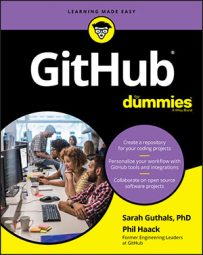 Explore Book Buy On Amazon
GitHub hosts and sponsors several conferences throughout the year. Many kinds of events focus on software developers. They range from the informal meet-up or user group to the structured multiday international software conference.

See which GitHub events are upcoming. This page lists GitHub’s own upcoming events, as well as events that it sponsors.

A meet-up or user group is an informal gathering of developers to cover a topic. Many are scheduled monthly and hosted by a local company or software interest group.

These events tend to be a great way to dip your toe into software developer events. They tend to be small gatherings of people in your area. Each month features a local speaker who talks about a topic relevant to the group. (Some user groups and meet-ups bring in speakers from outside on occasion, but typically they focus on highlighting local speakers.)

Meetups.com is a great way to find a meet-up relevant to your interests. You can search for meet-ups by location on meetups.com. For example, check JavaScript meet-ups for the Seattle Washington area.

A few examples of local meet-ups include

A regional conference is a relatively small conference where speakers and attendees outside of the local area are welcome, but the focus of the conference is to provide a venue for local developers and speakers to connect and present their work.

Often these conferences are one or two days. Many will have a single track of talks, or two at most. They’re a step up in size and structure from a meet-up and typically occur once a year, as opposed to monthly.

Some of them often offer workshops either before or after the conference. These workshops usually cost extra, but offer more in-depth training for a specific skillset or technology. For example, you can often find a full-day workshop dedicated to improving your Git skills. If you can afford it and find one that teaches a skill you want to improve, workshops are often worth the investment.

Some great examples of local conferences include

A hackathon is very different from a conference. While conferences focus more on having speakers teach a topic through a talk, hackathons focus on building. A hackathon is an event that may last several days where groups of people form teams to work together collaboratively write code to solve some sort of problem.

The usual format is some sort of problem is presented and teams are tasked with building a solution. The technology stack they may use is often dependent on the focus of a hackathon. For example, a mobile development hackathon will require that attendees build a mobile app to solve the problem.

Hackathon is a portmanteau of the words hack and marathon. Many take the marathon aspect to the extreme by having teams work around the clock with very little sleep. Others try to create a balance of working hours and sleeping hours by forcing contestants to leave the workspace.

Hackathons are often very inclusive of beginners. For example, SD Hacks is open to any high school or college student in the world who is 18 or older. You don’t always have to have a team when you sign up for a hackathon. Often, you can find one when you get there. It’s best to check out the FAQ for the specific hackathon to learn more about the details.

One of the largest, worldwide hackathons is targeted to college students. It’s the Microsoft Imagine Cup. Winners of the Imagine Cup can win mentorship from Satya Nadella (Microsoft CEO), travel to the world championship, and receive Azure grants and $100,000.

Attending hackathons can be a great way to be introduced to a new technology. The goal isn’t to design and implement a final product, but rather to hack together bits and pieces to make progress on an idea that you have. The end product should look more like a prototype than a polished application. Often times, hackathons will have mentors that know a particular technology that you can learn from. Think of a hackathon as a dedicated time and place to experiment and learn.

Though attending a formal hackathon will provide you with mentors, a space, and sometimes prizes, you can also always get together with friends to do one on your own, too! Just pick a time, place, and goal and try to hack together a prototype of an idea you have! It doesn’t hurt to give it a shot!

A major conference tends to be large and draw attendees from all over the country, if not the world. Attendee counts tend to be in the thousands. Attending one of these conferences requires a bit more up-front planning. It’s not just arranging your flight and hotel. These conferences tend to have many tracks, so for any given time slot, you may have to choose which talk you want to see from five or more talks at the same time.

Like a regional conference, major conferences often offer an array of workshop offerings before or after the conference. In addition to workshops, many also include hands on labs during the conference. Labs are usually included in the price of the conference and offer a great chance to actually try out the technologies you’re hearing about at the conference.

Many of these conferences are thrown by large technology companies, such as Microsoft’s Build conference and Apple’s WWDC.

A few examples include

GitHub Universe is the flagship conference for GitHub. It is held yearly in the city where GitHub’s main headquarters resides, San Francisco, California. The conference is usually held in the fall around October or November.

As GitHub describes it,

GitHub Universe is a conference for the builders, planners, and leaders defining the future of software.

This conference is where GitHub typically makes its biggest announcements of the year during the keynotes. It attracts well-known speakers from prominent software companies.

In 2018, the conference had around 1,800 attendees who attended three tracks of talks. The cost of the conference is reasonable, around $99 per person, or $199 if you also attend the workshops.

The GitHub Satellite conferences are an offshoot of GitHub Universe. They bring a GitHub universe-style conference to locations around the world.

Held once a year, past Satellites have been held in places such as Berlin, Tokyo, and London.

GitHub Constellation is a series of small community events held multiple times a year around the world. These events focus on the local community and often feature speakers local to the area. They are typically free and occur over one or two evenings. They’re not all-day conferences like Satellite and Universe.

Git Merge, is a conference sponsored by GitHub, but focused on the Git version control tool and the people who use it every day. As GitHub puts it,

Through technical sessions and hands-on workshops, developers and teams of all experience levels will find new ways to use, build on, and scale Git.

The conference features a preconference hands-on day of workshops focused on a range of Git topics. This conference is a great one to learn more about Git and to improve your Git skills.