By: Candace Leiden and Marshall Wilensky and
Updated: 02-28-2022
From The Book: TCP / IP For Dummies 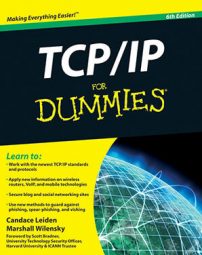 Explore Book Buy On Amazon
As a network administrator, you know that TCP/IP is the glue that holds the Internet and the Web together. As well as being familiar with security terms and general definitions, you need to pay attention to RFCs (Requests for Comment) published by the Internet Engineering Task Force. You can comment on, learn from, and submit RFCs yourself.

Knowing your way around TCP/IP is key if you want to manage a network successfully. The definitions in the following list explain the basics, such as what an IP address is, and they also clarify the various nets you deal with — extranets, intranet, and subnetting — as well other key terms.

Are you acronym challenged? If you don’t know what a particular acronym means, visit WhatIs? where you can find thousands of definitions for Internet and security acronyms.

Internet security terms and tips to use with TCP/IP

You’re a network administrator, so you know that keeping your Web site secure is an ongoing challenge. You don’t have to know that TCP/IP stands for Transmission Control Protocol/Internet Protocol to use it effectively, but knowing the terms in the following list can make you better able to deal with security issues.

Notable requests for comments of interest to TCP/IP users

As a network administrator, you’re familiar with certain things — TCP/IP, security threats, and Requests for Comments, or RFCs. Published by the Internet Engineering Task Force, RFCs offer a chance for professionals to share information, present papers for review, and generally communicate amongst themselves. Some RFCs eventually get adopted as Internet standards.

The following list contains RFCs that are especially interesting and/or useful:

Marshall Wilensky was a consultant and network manager for multiprotocol networks at Harvard University's Graduate School of Business Administration. Both are internationally known speakers.