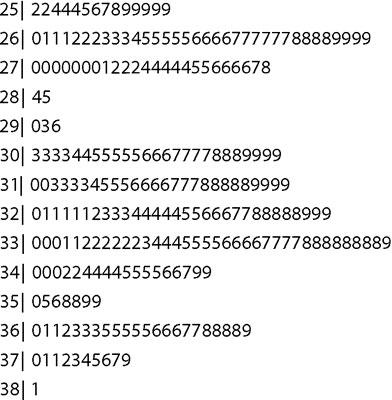 One of the advantages of a stem-and-leaf diagram is that it's easy to identify the mode of a dataset. (Recall that the mode is the value that occurs most frequently in a dataset.) If you look only at the dollar ranges, then it's easy to spot which range contains the most observations — the one with the longest leaf. In this case, a price in the 33 range ($33.00–$33.99) would be considered to be the mode because it contains the most observations.

Another advantage of this diagram is that outliers are easy to spot. An outlier is an observation in a dataset that is significantly larger or smaller than the other observations in the dataset. An outlier would be indicated by a large gap between either the first or last stem and the next closest one. (Chapter 10 talks more about outliers.)

One drawback to stem-and-leaf diagrams is that they become difficult to interpret for large datasets because the size of the leaf becomes unwieldy.