How Government and Nonprofits Battle Budgets with AI

By: Zachary Jarvinen and
Updated: 08-20-2020
From The Book: Enterprise AI For Dummies 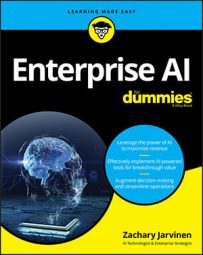 Explore Book Buy On Amazon
In addition to not pursuing profit, government agencies and nonprofit organizations often work with constrained budgets and limited resources, and AI can help with both.

In 2002, the world generated 5EB (exabytes) of data. That is the equivalent of a 4-quadrillion (18 zeroes) page text document or 5 billion hours of high-definition YouTube videos. Ten years later, the world was generating that much data every week. Now, the world churns out more data than that every day. The following figure gives you an idea of how quickly data generation has ramped up since the commercialization of the Internet. 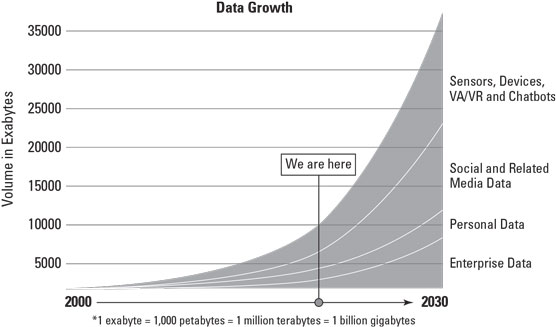 The data tsunami touches everyone, but it particularly hits government, the ultimate bastion of paperwork. Government offices and officials have been swamped by numbers and paperwork for centuries.

For the 1880 U.S. census, it took eight years to process 50 million responses by hand. To address this problem, inventor Herman Hollerith took a hint from Joseph Marie Jacquard’s automated loom, which created sophisticated weaving patterns controlled by punched cards. Hollerith developed a punched card driven electronic calculating machine. As a result, even though the population grew 25 percent to 62 million, the 1890 census took only six years to process, saving the government $5 million.

For 2022, Gartner has projected the global government and education IT budget will hit $634 billion. Unfortunately, most government IT departments spend nearly 75 percent of their budgets on maintaining legacy systems.

Seventy percent of U.S. government workers are over 40 years old, matching the age of many of the IT systems they use to do their jobs. For example, until July 2019, the Strategic Automated Command and Control System that controls the U.S. nuclear arsenal ran on a computer system that requires eight-inch floppy disks. In July, the U.S. Department of Defense upgraded the system to highly secure solid-state digital storage.

Citizens routinely encounter twentieth-century systems when renewing a driver’s license, engaging with elected representatives, or applying for benefits, an experience that can be underwhelming at the least, if not frustrating.

Typically, every agency has its own intake process with its own forms and its own databases, which severely hampers any attempt to deliver a seamless experience to the user of government services. In addition, the silos expand across domains, preventing agencies from acting on the valuable information available in social media, websites, forums, and email. This vast pool of unstructured data can provide significant insights into the people that government agencies serve and could significantly enhance the quality of services provided.

Budget cuts are also having an impact on security. A recent Thales Security report revealed that 70 percent of U.S. government agencies have experienced a data breach, 57 percent in 2018 alone.

Consequently, it’s not surprising that in a recent CohnReznick survey 89 percent of nonprofits placed cybersecurity in their top three (37 percent) or top ten (52 percent) concerns. However, only 32 percent of the surveyed organizations had performed a cybersecurity assessment that included penetration testing.

A Salesforce survey found that 74 percent of nonprofits list among their top challenges capturing and managing accurate donor data. In addition, 37 percent said their priority was to reduce the costs of program execution, but only 16 percent prioritized reducing manual tasks, a significant contributor to cost reduction.

A global Association of Certified Fraud Examiners report on fraud across all sectors indicated that 25 percent of fraud cases occur in government agencies (16 percent) and nonprofit organizations (9 percent). The study also showed that although the risk stays fairly constant regardless of the size of an organization (between 22 and 28 percent), the median financial loss from organizations with fewer than 100 employees ($200,000) is twice as much as for larger organizations.

A McKinsey study found that government programs detect less than half of the losses due to fraud, waste, and abuse, which amounted to $57 billion detected out of $148 billion lost in 2017.

Nonprofits had the smallest median loss of $75,000, but given the limited resources of most nonprofits, this amount can deal a death blow to the organization. In fact, another study showed that 25 percent of nonprofits that experienced a publicized fraud incident shut down within three years, with the mortality rate focused on smaller and newer organizations.

Artificial intelligence is uniquely suited to address these challenges that nonprofits and government agencies face.

Zachary Jarvinen, MBA/MSc is a product & marketing executive and sought-after author and speaker in the Enterprise AI space. Over the course of his career, he's headed up Technology Strategy for Artificial Intelligence and Analytics at OpenText, expanded markets for Epson, worked at the U.S. State Department, and was a member of the 2008 Obama Campaign Digital Team. Presently, Zachary is focused on helping organizations get tangible benefits from AI.