How to Type on the iPad Keyboard

You can type on your iPad, although don’t expect to pound out the prose as easily as you can on your computer. The on-screen keyboard (the iPad’s portrait mode keyboard is shown in this figure) is a bit too small for rapid and accurate typing. However, the iPad and iPad mini do touchscreen typing better than any other iPad out there.

To use the keyboard, tap into an area that requires text input and the keyboard appears automatically. Tap the keys that you want to enter. As you touch each key, a magnified version of the letter pops up. If you touch the wrong key, slide your finger over to the correct one. The keyboard will not enter a key until your finger comes off the screen. 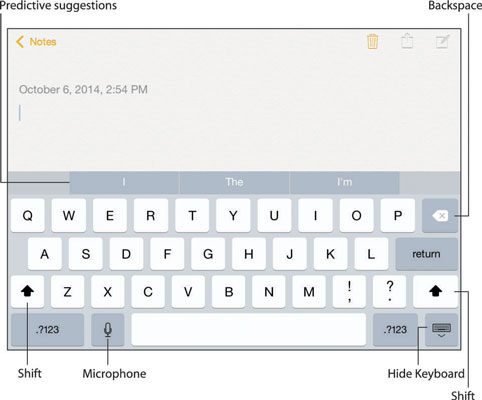 Special keys on the iPad

The keyboard features the following specialty keys that allow you to do some tricks:

Edit text on your iPad

How do you move throughout the text in order to edit it? The only obvious option is to delete all the way back to your error, which is impractical to say the least. The solution is, of course, in the touchscreen, which enables you to zoom in on the specific section of text you want to edit. Follow these steps to do so:

As you type, the iPad often tries to predict which word you want to use, and in iOS 8 it displays its suggestions in a bar that appears just above the keyboard. (In earlier versions, a single suggestion appears underneath the current word.) This is called predictive typing, and the suggestions you see depend on the context of your writing. You have three ways to handle these suggestions:

The suggestion feature also shows up with misspelled words. iOS guesses the correct word and provides a suggestion. If the suggestion is the word you want, tap it to accept it.