Connect Your iPad Tablet to Your Computer

When the iPad was first released, it looked as though that glorious day when computers and devices could just sort of sense each other’s presence and begin a digital conversation without requiring something as inelegant as a physical connection might have finally arrived.

However, despite the fact that the fancy-schmancy iPad supported two wireless connection technologies — Wi-Fi and Bluetooth — exchanging data between it and a Mac or PC required a wired connection.

Well, those days are long gone. Yes, you can still use a cable to connect your iPad or iPad mini and your computer, but iOS now also supports wireless connections via Wi-Fi. The next couple of sections provide the details.

Although iOS supports Wi-Fi syncing, USB connections are still important for those times when you want to use iTunes to change your sync settings. To make an old-fashioned USB-style connection, you can proceed in one of the following ways:

The dock connection for the fourth-generation iPad or later and the iPad mini would be much less convoluted if you could use a Lightning-friendly dock. However, Apple claims it won’t be making such a dock.

The first time you connect your tablet to your computer, iTunes displays a dialog telling you that you haven’t elected to have your tablet trust this computer. Meanwhile, on your tablet, you see a Trust This Computer? dialog, as shown in this figure. Tap Trust to proceed, and in iTunes, click Continue. 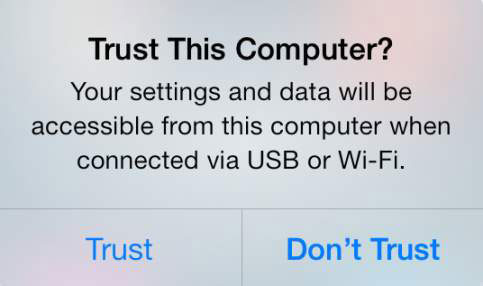 As long as your iPad or iPad mini and your computer are connected to the same Wi-Fi network, the Wi-Fi connection happens automatically, but only if you prepare your tablet. Specifically, you need to follow these steps:

After you do all of that, you’re ready to sync over Wi-Fi.