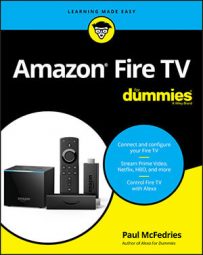 Explore the two-sides-of-the-same-coin ideas of streaming media and streaming media devices, which are at the core of the Fire TV experience. Do you really need to know this background to use Fire TV? Will having a working definition of streaming benefit you when you’re binge-watching Fleabag? Well, okay, the honest answer is “No” on both counts. Or, I should say, the answer is “No” if you don’t care about getting the most out of your Fire TV investment, you’re not the least bit curious how this technology works, or you’re 100 percent certain that you’ll never have problems with Fire TV. 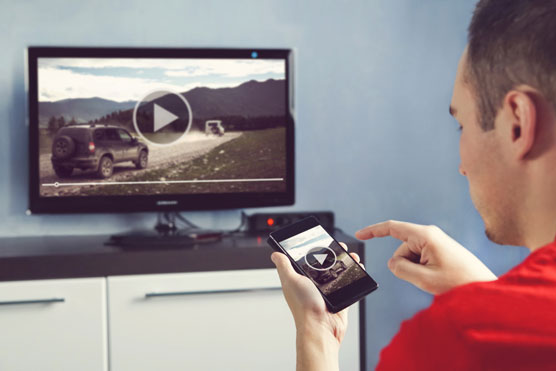 If you were around for the early days of the web — I’m talking about the mid to late 1990s — then you probably remember when the web pages of that era, which contained mostly text with a few images, started giving way to pages that contained media — music, TV shows, and even short movies. That was a fun development, but no one would have described it as “on-demand” entertainment because it could take anywhere from a few minutes to an hour or more for the media you clicked to download to your computer. Crucially, you had to wait until the entire media file was downloaded before you could start the playback. Inevitably, with Murphy’s Law (“Anything that can go wrong will go wrong”) in full effect back then (as it is today), the longer you had to wait for a media file to download, the more likely it was that the download would crash when it was 99 percent complete.

The molasses-in-January pace and the don’t-breathe-until-it’s-done fragility of media downloads were facts of online life back then, but a few nerds started thinking there had to be a better way. They realized that for most people, however slow their download speed, it was still faster than the rate at which they listened to or watched whatever media was being downloaded. Why was this speed difference important? Because it meant that after at least some of the media was downloaded, it could start playing from the beginning and the rest of the download could continue in the background without fear that the user would “catch up” to the download and be forced to wait.

This breakthrough meant that most media would start playing within a few seconds. It also meant that, usually, the media was never really “downloaded” to the user’s computer; instead, when the media started playing, it would continue to play until it was over or the user moved on to something else. Consuming media online became like sitting on the bank of a stream watching the water flow by, so some sensitive poet of an engineer coined the term streaming to describe this new way of listening to and viewing media.

Nowadays, streaming has gone, well, mainstream for a couple of reasons. First, many users now have computers and/or mobile devices that are powerful enough to process even the largest and most complex incoming audio and video signals. Second, lots of people (at least in the developed world) have speedy Internet connections and home networks, which means that streams usually start within a few seconds and the streaming buffer — the area of memory that’s used to store the next few seconds or minutes of the media (more on this a bit later) — is always full, which results in a continuous and glitch-free playback.

Streaming today usually comes in one of the following forms:

Imagine yourself sitting on the bank of a fast-running stream. Your eyes see the water whooshing by; your ears hear the babbling of the brook; your nose smells the wonderful scent of clean water; if you feel like it, you could also use your hands or feet to sense the coolness of the stream and your tongue to taste the freshness of pure water. In much the same way that your senses give you “access” to a stream, you need a special device to “access” an online media stream.

Sometimes that device is just a piece of software. For example, when you click to play a YouTube video, the YouTube site streams that video using special playback software that runs right in your web browser.

Increasingly these days, however, that device is a piece of hardware called a streaming media device, and it offers two main features:

Amazon gadgets such as the Fire TV Stick, Fire TV Stick 4K, and Fire TV Cube are streaming media devices that use your TV or a mobile device to display a streaming service interface and play audio, video, and live streams, which you can control using either the bundled remote or Alexa voice commands.

As you might imagine, streaming media is a hideously complex bit of business that requires extremely sophisticated hardware and software to make everything work as well as it does. The good news is that you don’t need to know anything about that complexity, so you can shut off all those alarm bells going off in your head. Instead, this section provides you with a very basic overview of how streaming performs its magic.

Streaming is a five-step process

The buffering process that occurs in steps 4 and 5 of the previous section is such a crucial part of streaming that it goes on throughout the playback, not just at the beginning. For example, when you examine the current progress of the playback, you usually see a progress bar. The circle shows your current position in the playback. Just ahead of the circle is a dark portion of the progress bar, which shows you how much of the upcoming stream is stored in the buffer; the rest of the progress bar is white, which tells you that part of the stream hasn’t yet been received by the streaming media device. (The colors may vary on your TV or mobile device.)

Why not just play the media as it arrives and skip the buffer altogether? That would be nice, and it just might work in an ideal world, but the world we actually inhabit is far from ideal. In real life, media streams can suffer from a number of problems:

Any one of these problems could cause the stream playback to be interrupted for anything from a split second to a few seconds. Without a buffer to fall back on, your show or song would have to stop mid-playback to wait for the delay to resolve itself. However, with anywhere from a few to a few dozen seconds stored in the buffer, the streaming media device can keep the stream playing, and you remain blissfully unaware of any problems because they happen in the background, without affecting your enjoyment of the media.

When you’re looking to sign up for an account with an Internet service provider (ISP), you’re usually presented with several plans of varying prices. One of the features that varies with the price of each plan is the amount of data per month that you can transfer between the Internet and your modem. This is called usage or monthly usage, and the cheaper the plan, the lower the usage limit you get per month. That limit is important because if you go over that amount in a given month, the ISP will charge you a small fortune for each gigabyte (GB) that you exceed your cap.

Overage fees can easily run to several dollars per gigabyte, and Internet forums are awash in tales of people getting dinged $100 or $200 for going way over their monthly allowance. So, yes, for all but the most well-heeled, this is big bucks I’m talking about here.

It’s important to know early in your streaming career that streaming media is very data-intensive, meaning it requires tons of usage. For example, here are the data usage values for some popular music streaming services: Similarly, here are the data usage values for various types of video stream qualities (most video streaming services give you the option of streaming video in two or more of these values): Based on these usage values, you can see that it wouldn’t be that hard to use anywhere from 5GB to 10GB of streaming media a day. That translates to 150GB to 300GB a month, which is bad news, indeed, if your ISP’s monthly usage cap is 100GB!

My advice? Get an unlimited Internet plan if you can afford it. If that’s too pricey for your budget, then keep an eagle eye on your daily usage (most ISPs offer a tool that lets you view your daily usage). If you see that things are getting out of hand, usage-wise, dial back the streaming for a few days or a week to make sure you don’t go over your cap.

What you need to stream: apps and hardware

What you need to get into the world of streaming varies widely depending on a number of factors, including what streams you want to check out, your budget, your tolerance for complexity, and your desire for convenience.

At the simplest end of the streaming world, all you need is an Internet connection and a web browser. In this bare-bones scenario, you surf to a streaming site (such as Netflix, Spotify, or YouTube), sign into your account (if the site requires an account, as most do), and then use the site’s interface to find and play the streams you want. Many streaming sites offer free accounts (supported by the ads you’re forced to view), so you can get into streaming without forking over any extra cash.

Jumping around from one streaming website to another isn’t hard, but it tends to get cumbersome as your stable of streaming services gets larger (as it inevitably will). One easy way to get around the inconvenience of multiple websites is to use the apps that most streaming services provide. Install the app on your smartphone or tablet, use the app to sign in to your account on the streaming service, and — voilà! — you can now locate, curate, and watch streaming media on your mobile device!

Viewing streaming media on a mobile device might seem like the perfect solution for an age obsessed with its smartphones and tablets. There’s also something wonderfully intimate about watching a TV show or movie on a mobile device. That said, scratching the streaming itch using only mobile device apps does have its downsides:

There are ways to send a mobile device’s video stream to a TV (this is called mirroring), but an easier way to solve all these problems is to throw more hardware at them. I speak, in particular, of a streaming media device, which is designed to take an incoming stream and display it on a connected TV screen (or mobile device). Even better, all streaming media devices come with a large collection of apps for streaming services.

This means that you can collect all your streaming apps in one location and view each app’s streaming content on whatever TVs and mobile devices you’ve connected to the streaming media device. It’s a pretty sweet setup, and it’s the Fire TV way of doing things.