How to Work with Fractions on the TI-84 Plus

There’s no fraction key on the TI-84 Plus calculator, per se, but many fraction tools are built into this calculator. For starters, isn’t a fraction just division in disguise? So, pressing / between two numbers creates a fraction.

Do you prefer fractions or decimals? Would you rather work with an improper fraction or a mixed number? There’s no right answer to these questions, but what would make you (or your teacher) happy? Changing the mode of your calculator forces the calculated answers into a form of your liking. Be careful; this is a big decision on your part!

Setting the mode not only affects calculations on the Home screen, but also the way lists and sequences are displayed.

There’s one more mode decision you need to make. What type of fraction do you prefer: improper fractions or mixed numbers? Press [MODE] and change the FRACTION TYPE to one of these two choices:

There’s an easy way to convert a decimal to a fraction, regardless of the mode setting. You can access the Frac and Dec functions in the first two options in the Math menu. The Frac function displays an answer as a fraction.

Did you know that there are four hidden shortcut menus on your calculator? The four menus are: FRAC (Fraction menu), FUNC (Function menu), MTRX (Matrix menu), and YVAR (Y-variables menu). To access the hidden FRAC menu, press [ALPHA][Y=]. See the first screen. Notice that after pressing [ALPHA], the keys at the top of your keypad become soft keys that activate on-screen menus.

(at the bottom of the NUM menu) to find the FRAC menu in a standard menu. See the second and third screens.

Press [ALPHA][Y=] to access the FRAC menu. The first two options in the FRAC menu are easy-to-use fraction templates:

The next two options are used for conversion:

Don’t worry! You can enter complex numbers into fractions the old-fashioned way, using parentheses and the division key. Your calculator automatically simplifies fractions that contain a complex number in the denominator. See the second screen. 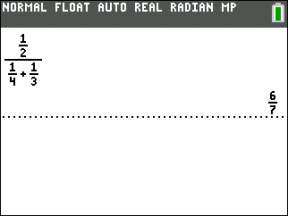