So when you start the app again at a later time, any data previously stored in these lists will still be there, provided that you didn’t delete the lists from the memory of the calculator.

The Inequality Graphing app can store any data point whose coordinates appear at the bottom of the graph screen. Such points are found using Trace, Pt of Intersection-Trace, or any of the first five tools in the CALC menu.

A data point can be stored in the calculator only when the cursor is on that point and the coordinates of the cursor location appear at the bottom of the graph screen. When this is the case, press

to store the coordinates of the data point. You usually get a message saying, “Point appended to (∟INEQX, ∟INEQY)” or “Duplicate point.” The first message tells you that the x-coordinate of your data point is stored in the list named INEQX and the y-coordinate is stored in list INEQY. 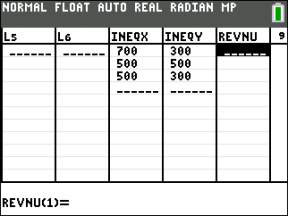