How to Graph Polar Equations on Your TI-84 Plus

After you have set the window and entered the polar equation, graphing the equations on your TI-84 Plus is easy. Before you press [GRAPH], make sure you watch the direction as your graph is created. If your θstep is small enough, you should be able to see the graph develop. 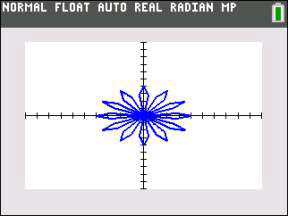 Using Zoom to change the window

If the graphing window is not to your liking, you can use any of the Zoom commands. Here are the steps that to get a nice window for the polar graph.

Follow these steps to evaluate a polar equation at specific θ values:

Viewing the table of a polar graph

It is easy to view the values of your variables all in one table. Press [2nd][GRAPH] to view the table as shown in the first screen.

Read the Context Help in the border at the top of the table. To change the table increment, press [+] and edit the value at the bottom of the screen as shown in the second screen.

Another option is to show a split screen with a graph and a table. Press [MODE], use the arrow keys to highlight GRAPH-TABLE, and press [ENTER]. Press [GRAPH] to see the split screen. Using Trace in the Graph-Table mode automatically highlights the ordered pairs in the table, as shown in the third screen.

When using Trace, if Format is set to Rect GC, you will see X, Y, displayed on the graph screen. This means you can view X, Y, r, and θ all on the same screen! Wow!