Deciding on a DSLR Camera for Your Drone

DSLR cameras can be a great accessory for your drone. DSLR stands for digital single light reflex, and the term is used to categorize high-end consumer and professional quality digital cameras. DSLR cameras come with a huge range of features and technical capabilities, which is why their uses span from hobby to professional. DSLR cameras have larger sensors than their point-and-shoot little brothers.

Bigger is definitely more expensive when it comes to DSLRs. Bigger sensors come at a high price point, but they also provide much better imaging capabilities.

DSLR cameras can be for the beginning and aspiring photographer. Smaller cameras still come with several manual image control features and the option to swap out images. This gives the user the ability to try different combinations of settings and lenses. DSLR cameras are much larger and heavier than point-and-shoot cameras. They are also a little more complex, which may slow you down when you are setting up your drone. 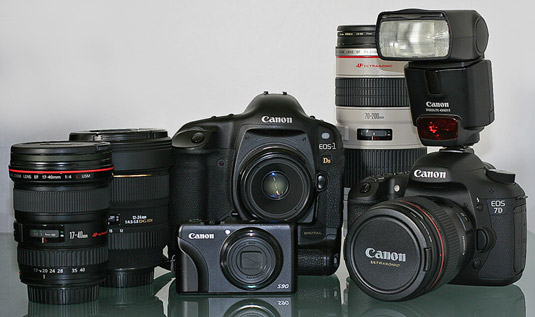 Credit: Source: Scott.Symonds/Creative Commons
A DSLR for every occasion.

While DSLR cameras were original developed purely for photography, in recent years, DSLR manufacturers started adding in video modes. This was intended to give users the option to capture some footage, but it was never intended to be the sole purpose of the camera. DSLR video footage can look so incredible, however, that video geeks everywhere have started using DSLR cameras specifically for video.

Here are just a few reasons why DSLR cameras are an appealing choice for recording video footage:

One major problem with filming on DSLR is that big image sensors get extremely hot when used in video mode. DSLR cameras did not come with any sort of cooling built into the cameras, which means that overheating is a major issue. To work around this, you can capture video short chunks before having to shut down the camera and restart it.

DSLR cameras are a great camera for people who are serious about photo­graphy and video. The major drawback is that DSLRs are heavier than the point-and-shoot cameras, and depending on the lens, weight and balance can become a major issue. Remember, the heavier it is, the more it is going to cost you! You are going to need a big drone to lug your high-end camera around and you are going to need a big wallet to pay for the repairs if you crash your DSLR-toting drone.

If you decide to go the route of a DSLR, there are several major manufacturers of DSLR cameras to consider like Pentax, Sony, Olympia, Nikon, and Canon. However, photo and video aficionados gravitate toward either Nikon or Canon, and you will hardly get an objective opinion from either on the merits of their camera of choice. So when it comes to picking your DSLR, focus on: