Acquiring an Action Camera for Your Drone

If you enjoy the adrenaline rush that comes from extreme sports, you may want an action camera for your drone. Action cameras are small, durable cameras that were originally designed to give extreme sport enthusiasts a high-quality video camera to capture their hobbies up close and personally. Action cameras today are mounted to cars, mountain bikes, surf boards, and more.

They are used to capture sky-diving, skateboarding, mountain biking, rock climbing, base jumping, fly fishing, and even more. They are versatile, powerful video cameras that have made movie making in crazy places a possibility.

These little cameras defy conventional wisdom that says that bigger is better. While the bigger sensors and bigger lenses are great for capturing deep, full, beautiful images, action cameras are capable of really wowing you with their video capabilities.

In fact, the video footage is so good, that action cameras have actually been used to make major motion pictures like The Need For Speed. The driving scenes in this movie were almost exclusively filmed with GoPro cameras. Action cameras were designed precisely for being put in harms way, and that makes them a great match for drone use. 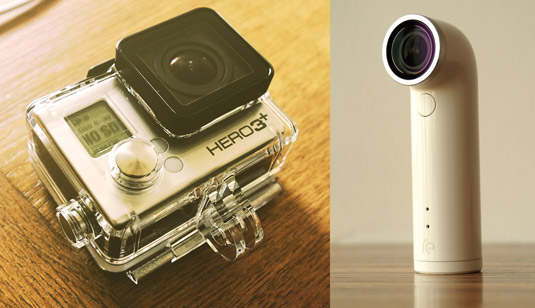 There are a lot of action cameras available today. Action cameras are extremely compact and therefore lack the physical space to incorporate a larger image sensor. These cameras also lack the option to change out or add on additional lenses. This means that your approach for selecting an action camera will be based off a different set of criteria than what you would use when picking a DSLR camera or point-and-shoot.

Action cameras need to be small so that they can ride along without greatly impacting the user. So they tend to lack a lot of the functionality that you might see with a DSLR or even a point-and-shoot. Since action cameras were designed with action in mind, they should have features that would be useful in capturing action footage like high-definition video modes.

They should have high frame rates so that you can make beautiful slow-motion video clips, too. Streaming video feeds to a computer or monitor over Wi-Fi or Bluetooth is great for setting up your shot in the case that your camera is too compact to support an LCD.

Here is a list of features that you should take into consideration when picking your action camera:

Here is a comparison of several action cameras available today. You’ll notice that most of the prices are in the $200-$400 range. The GoPro Hero 4 Black, however, is nearly $500 but it comes loaded with features that have led to it being widely accepted and used by drone flyers around the globe.