To simplify the problem, assume zero initial conditions: zero initial capacitor voltage for each integrator as shown here. To solve a differential equation, you need to develop a block diagram for the differential equation (which is represented by the dashed boxes in the figure), giving the input and the output for each dashed box. Then use the block diagram to design a circuit. 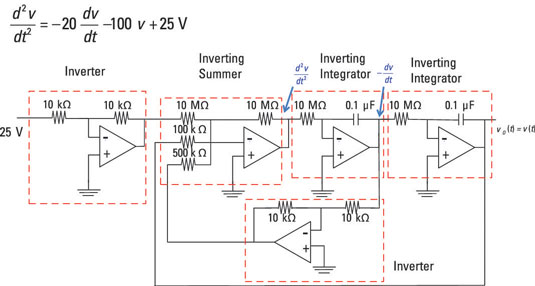 On the far left of the figure is a forcing function of 25 volts derived from the following steps; the output voltage vo(t) = v(t) is on the far right.

Here are the basic steps for designing the circuit:

The sample circuit shown here is one of many possible designs. But you can apply this basic process to solve their differential equations using op amps.