How to Perform Complex Processing with Op Amps 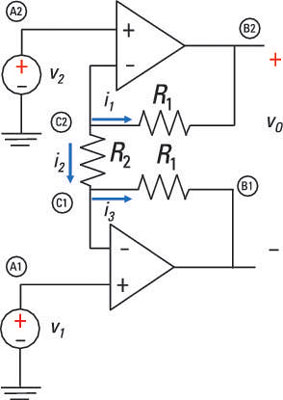 The sample circuit shows the noninverting input connected to independent voltages v1 and v2. Use the op amp voltage constraint vP = vN to get the following:

Substitute v1 and v2 into KCL equations, which gives you

Now solve for vB2 and vB1, because the output voltage vO depends on these two values:

The output voltage vO is the difference between the vB1 and vB2:

Cool! Resistor R2 can be used to amplify the difference v2 – v1. After all, it’s easier to change the value of one resistor R2 than of two resistors R1.

As an example of how op amps can solve equations, consider a single output and three voltage input signals:

You can rewrite the equation in many ways to determine which op amp circuits you need to perform the math. Here’s one way:

You can see one of many possible op amp circuits in the top diagram of this sample circuit. The dashed boxes indicate the two inverting amplifiers and the inverting summer. 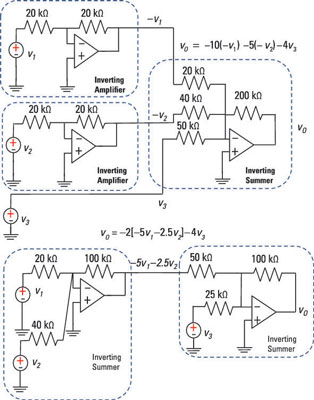 The outputs of the two inverting amplifiers are – v1 and – v2, and they’re inputs to the inverting summer. The third input to the summer is v3. Adding up the three inputs with required gains entails an inverting summer, which you see in the sample circuit.

Finally, for input v3, the ratio of the feedback resistor of 200 kΩ to its input resistor of 50 kΩ provides a gain of –4. You can use other possible resistor values as long as the ratio of resistors provides the correct gains for each input.

This suggests you need two op amps. One input is a combination of inputs v1 and v2 formed by an inverting summer. When you take the output of the first summer and feed it and another input to a second inverting summer, the result is proportional to v3 with gain –4. The bottom diagram of the sample circuit shows one way to implement this equation.

The input v3 to the second summer is multiplied by –4 because of the ratio between the 100-kΩ feedback resistor to the 25-kΩ resistor.

For example, you can do a digital-to-analog conversion (DAC) using the inverting summer. The primary purpose of this common device is to convert a digital signal consisting of binary 1s and 0s (perhaps coming from your personal computer) to an analog and continuous signal (to run your DC motor in your remote-control toy). The device has extensive applications in robotics, high-definition televisions, and cellphones.

This example is simplified by focusing on 3-bit devices (even though most applications use 8- to 24-bit DACs). DACs have one output voltage vo with a number of digital inputs (b0, b1, b2), along with a reference voltage VREF. Here you see a block diagram of a 3-bit input. 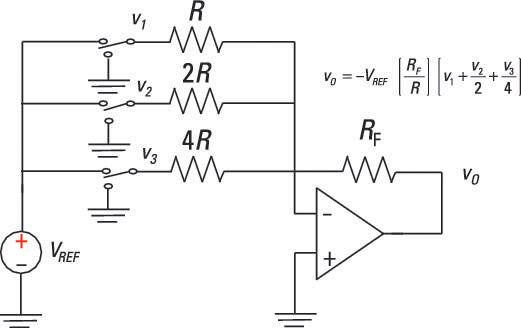 The following equation gives you the relationship between the digital input and analog output:

To implement a DAC, you can use an inverting summer, as shown in the figure. Also shown are the digital inputs that can have only one of two voltage values: A digital 1 is equal to VREF, and a digital 0 is equal to 0 volts.

The inputs v1, v2, and v3 to the summer are weighted appropriately to give you the voltage output vO based on the three inputs. Input v1 has the most weight, and input v3 has the least.