The maximum power theorem states that for a given source with a fixed Thévenin resistance RT, the maximum power delivered to a load resistor RL occurs when the RL is matched or equal to RT:

Mathematically, the power is given by the following expression:

To see how to determine the maximum power, look at the resistor arrangements for both the source and load circuits in this sample circuit. In this figure, the source circuit is the Thévenin equivalent, and the load resistor is a simple but adjustable resistor. 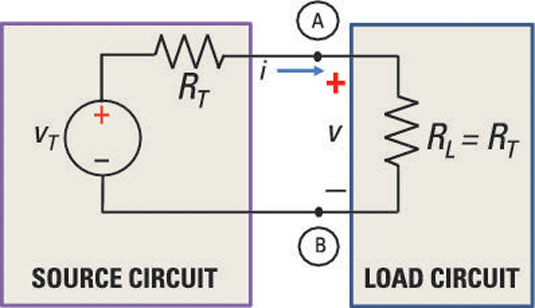 Intuitively, you know that maximum power is delivered when both the current and voltage are maximized at the interface Terminals A and B.

Using voltage division, the voltage v across the interface at A and B is

In the sample circuit, the connected circuit between the source and load is a series circuit. The current i flows through each of the resistors, so

This equation equals zero when the numerator is zero. This occurs when RL = RT. Therefore, maximum power occurs when the source and load resistances are equal or matched.