Here is an RL circuit that has a switch that’s been in Position A for a long time. The switch moves to Position B at time t = 0.

For this circuit, you have the following KVL equation:

Next, formulate the element equation (or i-v characteristic) for each device. Using Ohm’s law to describe the voltage across the resistor, you have the following relationship:

The inductor’s element equation is

Substituting the element equations, vR(t) and vL(t), into the KVL equation gives you the desired first-order differential equation:

On to Step 2: Apply the Laplace transform to the differential equation:

The preceding equation uses the linearity property which says you can take the Laplace transform of each term. For the first term on the left side of the equation, you use the differentiation property:

This equation uses IL(s) = ℒ[iL(t)], and I0 is the initial current flowing through the inductor.

The Laplace transform of the differential equation becomes

For a given initial condition, this equation provides the solution iL(t) to the original first-order differential equation. You simply perform an inverse Laplace transform of IL(s) — or look for the appropriate transform pair in this table — to get back to the time-domain. 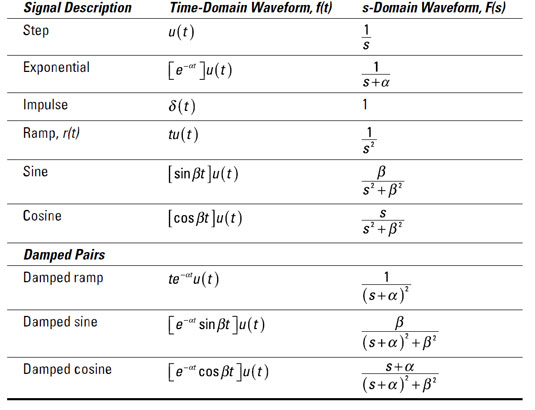 The preceding equation has an exponential form for the Laplace transform pair. You wind up with the following solution:

The result shows as time t approaches infinity, the initial inductor current eventually dies out to zero after a long period of time — about 5 time constants (L/R).