Radio Accessories for Your Ham Radio 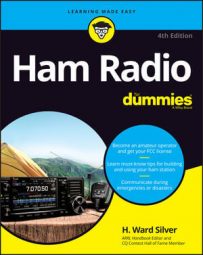 Explore Book Buy On Amazon
You can buy or build hundreds of gadgets for your ham radio to enhance whatever style or specialty you choose. Here’s some information on the most common accessories that you need to get the most out of your station.

Mikes, keys, and keyers for your ham radio

Most radios come with a hand microphone, although if you buy a used radio, the hand mike may be long gone or somewhat worn. The manufacturer-supplied hand mikes are pretty good and are all you need to get started. After you operate for a while, you may decide to upgrade.

If you’re a ragchewer, some microphones are designed for audio fidelity with a wide frequency response. Net operators and contesters like the hands-free convenience of a headset with an attached boom mike held in front of your mouth. Handheld radios are more convenient to use, with a speaker–microphone combination accessory that plugs into your radio and clips to a shirt pocket or collar.

The frequency response of a microphone can make a big difference on the air. If you operate under crowded conditions, the audio from a microphone whose response emphasizes the midrange and higher frequencies is more likely to cut through the noise. Some microphones have selectable frequency responses so that you can have a natural-sounding voice during a casual contact and then switch to the brighter response for some DXing. If you’re not sure which is best, ask the folks you contact, or do an over-the-air check with a friend who knows your voice.

Morse code enthusiasts have thousands of keys to choose among, spanning more than a century of history. Beginners often start with a straight key and then graduate to an electronic keyer and a paddle. If you think you’ll use CW a lot, I recommend going the keyer/paddle route right away.

Most rigs now include a keyer as a standard option. You can plug the paddle into the radio, and you’re on your way! CW operators tend to find paddle choice very personal, so definitely try one out before you buy. A hamfest often has one or more key–bug–paddle collectors, and you can try many styles. The ham behind the table is likely to be full of good information as well.

Programmable memories are very handy for storing commonly sent information, such as your call sign or a CQ message. You can put your keyer in beacon mode to send a stored CQ message repeatedly to see whether anyone is listening on a dead band. (If everybody listens and nobody transmits, the band sounds dead but may be open to somewhere surprising.)

If you decide on an external keyer, you can choose kits or finished models, such as the popular Winkey-based keyers made by K1EL. Several computer programs send code from the keyboard. Browse ac6v.com for an extensive list of software.

A voice keyer is a device that can store short voice messages and play them back into your radio as though you were speaking. Some keyers are stand-alone units, and others use a PC sound card. Voice keyers are handy for contesting, DXing, calling CQ, and so on. Some models also store both CW and voice messages, such as the MJF Contest Keyer. Contest logging software such as N1MM Logger+ and Writelog can create a voice keyer by using the computer’s sound card.

Antenna tuners for your ham radio

Antenna tuners don’t really “tune” your antenna, but they allow your transmitter to operate at maximum efficiency no matter what impedance appears at the station end of your feed line. Tuners are explained in the article “Do You Need an Antenna Tuner?”.

Although your new radio may be equipped with an antenna tuner, in some situations you may need an external unit. Internal tuners have a somewhat limited range that fits many antennas. Antennas being used far from their optimum frequency often present an impedance that the rig’s internal tuner can’t handle. External tuners often include baluns (an abbreviation of “balanced-to-unbalanced”) for connecting open-wire feed lines to coaxial cable.

Tuners are available in sizes from tiny, QRP-size units to humongous, full-power boxes larger than many radios. The table below lists a few of the manufacturers offering an assortment of tuners. If you decide to purchase a tuner, choose one that’s rated comfortably in excess of the maximum power you expect to use. Getting one with the option to use balanced feed lines is highly recommended. The ability to switch between different feed lines and an SWR meter (which measures reflected RF power) is a nice-to-have feature.

Along with the tuner, you need a dummy load, a large resistor that can dissipate the full power of your transmitter. The MFJ-260C can dissipate 300 watts, which is adequate for HF transceivers. High-power loads, such as the MFJ-250, immerse the resistor in cooling oil. (These are paint cans filled with oil, sometimes called cantennas after an old Heathkit product name.) The dummy load keeps your transmitted signals from causing interference during tuneup. HF dummy loads may not be suitable for use at VHF or UHF, so check the frequency coverage specification before you buy.

H. Ward Silver has experienced a 20-year career as an electrical engineer developing instrumentation and medical electronics. He also spent 8 years in broadcasting, both programming and engineering. In 2000, he turned to teaching and writing as a second career, producing Ham Radios For Dummies in 2004. He supports Seattle University’s Electrical and Computer Engineering Department in laboratory instruction. He is an avid Amateur Radio operator, Extra Class, first licensed in 1972. Each month, his columns and articles can be found in the national ham radio magazine, QST, published by the American Radio Relay League (ARRL). He is the author of the ARRL’s online courses in Antenna Design and Construction, Analog Electronics, and Digital Electronics. When not in front of a computer screen, you will find him working on his mandolin technique and compositions.