How to Go Digital with Your Ham Radio: MFSK, WLAN, Digital Voice, and APRS

On VHF bands, digital data modes have fewer restrictions on bandwidth. The bands are quieter, with less fading and interference, so data communication works better. At 440 MHz and up, you can use 56 kilobaud technology, and the D-STAR system supports an Ethernet bridge mode that connects two computers via the amateur 1.2 GHz band as though they were connected by a standard cable.

You’ll find a selection of articles about modes at ARRL. Also, the free multiple-mode software FLDIGI allows you to tune in and try many modes.

When you tune around the digital signal areas of the bands, you’re likely to come across signals that sound like crazy calliopes or steam whistles playing what sound like random melodies. These signals are multiple frequency shift keying (MFSK) modes.

Instead of varying the phase or amplitude of a signal to carry the information, MFSK uses different tones or sequences of tones to do the job. Because the data is digital 1s and 0s, the mode is made up of a group of discrete tones that you hear as “notes” on your receiver.

OLIVIA and MFSK16 are the most popular MFSK modes at this writing, but hams are innovating like crazy, and new modes are popping up all the time. The FLDIGI software package stays current with the variations as they come along.

The widespread adoption of wireless local area network (WLAN) technology such as Wi-Fi has brought the same technology within reach of hams as well. Hams share portions of the 2.4 GHz and other microwave bands with unlicensed LAN devices but without the power restrictions of consumer equipment.

Ham experimenters have adapted commercial WLAN protocols, with higher transmitter power and larger antennas than commercial technology products. The largest group is Broadband-Hamnet. Other groups, such as HamWAN, are building regional networks.

Amateur radio is also using digital voice links. Icom, one of the largest radio manufacturers, has introduced a D-STAR system of radios, repeaters, and networking equipment.

The digital data in the low-speed D-STAR transmissions includes both digitized voice and data characters, which has fostered applications such as D-RATS keyboard-to-keyboard mode. (A high-speed Ethernet bridge mode of D-STAR operates on the 1.2 GHz band.) The D-STAR protocols allow simultaneous voice and data use, leading to variations on text messaging, interfaces to the APRS network, and slow-scan TV image transfers, among other uses.

Codec2 is a new digital voice codec designed by David Rowe (VK5DGR) to work well on HF’s noisy frequencies as well as on the better-behaved VHF and UHF bands. Codec2 is an open-source software project, so expect to see it adapted in many ways.

The most common use of APRS is to relay location data from GPS receivers via 2 meter radio as an “I am here” service. APRS packets are received directly by other hams or by a packet radio digipeater.

If they’re received by a digipeater, the packets may also be relayed to a gateway station that forwards the call-sign and position information to an APRS server accessed through the Internet. After the information is received by a server, it can be viewed through a web browser or an APRS viewing program.

The map shows the location of WA1LOU-8. WA1LOU is a call sign, and -8 is a secondary station ID (SSID), allowing the call sign to be used for several purposes with different SSIDs. It shows that WA1LOU is in Connecticut, 7.9 miles northeast of Waterbury.

You can zoom in on WA1LOU’s location. If the radio changes location, this change is updated on the map at the rate at which the operator decides to have his APRS system broadcast the information. 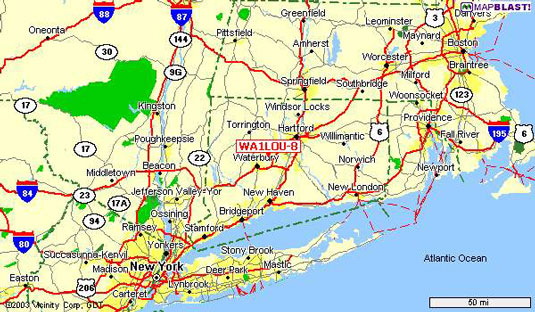 If you have a GPS receiver with an NMEA (National Marine Electronics Association) 0183 data output port and a 2 meter rig and packet radio TNC, you’re ready to participate. (Kenwood and Yaesu even make APRS-ready 2 meter radios that include GPS receivers or have direct GPS data interfaces.)

You can do a lot more with APRS than just report location. APRS supports a short-message format similar to the Short Message Service (SMS) format that’s used for texting on mobile phones. Popular mapping software offers interfaces so that you can have street-level maps linked to your position in real time by ham radio.

Race organizers use APRS to keep track of far-flung competitors. You can also add weather conditions to APRS data to contribute to a real-time automated weather tracking network.