The Dangers of Social Engineering 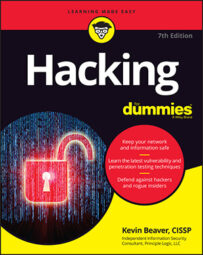 Explore Book Buy On Amazon
Many organizations have enemies who want to cause trouble through social engineering. These people may be current or former employees seeking revenge, competitors wanting a leg up, or hackers trying to prove their worth. In any event, the information gained from social engineering can be useful to someone hoping to launch a hacker attack against your organization.

Regardless of who causes the trouble, every organization is at risk to the dangers of social engineering — especially given the sprawling internet presence of the average company. Larger companies spread across several locations are often more vulnerable given their complexity, but smaller companies can also be attacked. Everyone, from receptionists to security guards to executives to IT personnel, is a potential victim of social engineering. Help-desk and call-center employees are especially vulnerable because they’re trained to be helpful and forthcoming with information.

If any of the preceding information is leaked, financial losses, lowered employee morale, decreased customer loyalty, and even legal and regulatory compliance issues could result. The possibilities are endless.

Social engineering attacks are difficult to protect against for various reasons. For one thing, they aren’t well documented. For another, social engineers are limited only by their imaginations. Also, because so many methods exist, recovery and protection are difficult after the attack. Furthermore, the hard, crunchy outside of firewalls and intrusion prevention systems often creates a false sense of security, making the problem even worse.

With social engineering, you never know the next method of attack. The best things you can do to counteract social engineering are remain vigilant, understand the social engineer’s motives and methodologies, and protect against the most common attacks through ongoing security awareness in your organization.

Trust — so hard to gain, yet so easy to lose. Trust is the essence of social engineering. Most people trust others until a situation forces them not to. People want to help one another, especially if trust can be built and the request for help seems reasonable. Most people want to be team players in the workplace and don’t realize what can happen if they divulge too much information to a source who shouldn’t be trusted. This trust allows social engineers to accomplish their goals. Building deep trust often takes time, but crafty social engineers can gain it within minutes or hours. How do they do it?

How social engineers exploit relationships to gain information for hacks

After social engineers obtain the trust of their unsuspecting victims, they coax the victims into divulging more information than they should. Whammo — the social engineer can go in for the kill. Social engineers do this through face-to-face or electronic communication that victims feel comfortable with, or they use technology to get victims to divulge information.

Wily social engineers can get inside information from their victims in many ways. They’re often articulate and focus on keeping their conversations moving without giving their victims much time to think about what they’re saying. If they’re careless or overly anxious during their social engineering attacks, however, the following tip-offs might give them away: A good social engineer isn’t obvious with the preceding actions, but these signs may indicate that malicious behavior is in the works. If the person is a sociopath or psychopath, of course, your experience may vary. (Psychology For Dummies, 2nd Edition, by Adam Cash [John Wiley & Sons, Inc.] is a good resource on such complexities of the human mind.)

Impersonating an employee is easy. Social engineers can wear a similar-looking uniform, make a fake ID badge, or simply dress like real employees. People think, “Hey, he looks and acts like me, so he must be one of us.” Social engineers also pretend to be employees calling from an outside phone line. This trick is an especially popular way of exploiting help-desk and call-center personnel. Social engineers know that these employees fall into a rut easily because their tasks are repetitive, such as saying “Hello, can I get your customer number, please?” over and over.

Technology can make things easier — and more fun — for the social engineer. Often, a malicious request for information comes from a computer or other electronic entity that the victims think they can identify. But spoofing a computer name, an email address, a fax number, or a network address is easy. Fortunately, you can take a few countermeasures against this type of attack.

Hackers can deceive through technology by sending email that asks victims for critical information. Such an email usually provides a link that directs victims to a professional, legitimate-looking website that “updates” such account information as user IDs, passwords, and Social Security numbers. They also may do this trick on social networking sites such as Facebook and Twitter.

Many spam and phishing messages also employ this trick. Most users are inundated with so much spam and other unwanted email that they often let their guard down and open emails and attachments that they shouldn’t. These emails usually look professional and believable, and often dupe people into disclosing information that they should never give in exchange for a gift. These social engineering tricks can occur when a hacker who has already broken into the network sends messages or creates fake internet pop-up windows. The same tricks have occurred through instant messaging and smartphone messaging.

In some well-publicized incidents, hackers emailed their victims a patch purporting to come from Microsoft or another well-known vendor. Users may think that the message looks like a duck and quacks like a duck — but it’s not the right duck! The message is actually from a hacker who wants the user to install the patch, which installs a Trojan-horse keylogger or creates a backdoor into computers and networks.

Hackers use these backdoors to hack into the organization’s systems or use the victims’ computers (known as zombies) as launchpads to attack another system. Even viruses and worms can use social engineering. The LoveBug worm, for example, told users they had secret admirers. When the victims opened the email, it was too late. Their computers were infected (and, perhaps worse, they didn’t have secret admirers).

Many computerized social engineering tactics can be performed anonymously through Internet proxy servers, anonymizers, remailers, and basic SMTP servers that have an open relay. When people fall for requests for confidential personal or corporate information, the sources of these social engineering attacks are often impossible to track.