By: Joseph Steinberg and Kevin Beaver and Ira Winkler and Ted Coombs and
Updated: 01-10-2023
From The Book: Cybersecurity All-in-One For Dummies 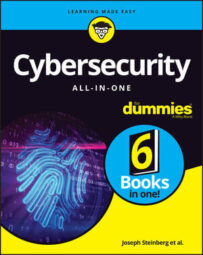 Explore Book Buy On Amazon
To cyber-protect your personal and business data, make sure everyone at home and at work recognizes that they are a target.

People who believe that hackers want to breach their computers and phones and that cyber criminals want to steal their data act differently than people who do not understand the true nature of the threat. Many businesses use security awareness programs to improve security related behaviors.

Protecting your data from Internet scams

The following tips help you protect your data and keep yourself and your family safe from Internet scams:

Managing cybersecurity in your organization

The following tips can help you communicate effectively about cybersecurity challenges in your organization:

These tips help prevent social engineering attacks in the workplace:

Following, are some general questions you should ask everyone you interview when creating a security awareness program. You also need to ask questions specific to the person’s job function and relationship or the influence they have to their awareness person.

Password-cracking tools can be used for both legitimate security assessments and malicious attacks. You want to find password weaknesses before the bad guys do.

You can try to crack your organization’s operating system and application passwords with various password-cracking tools:

Ted Coombs is a direct descendant of King Edward of England, a former world record holder for most miles roller skated in a day, and a longtime technology guru and author. He’s written over a dozen technology books on a wide array of topics ranging from database programming to building an internet site. Along the way he helped create early artificial intelligence tools and served as cybersecurity professional focused on computer forensics.