How to Make Your Libraries Visible in Windows 10

Explore Book Buy On Amazon
When you bring up File Explorer in Windows 10, you're placed in a make-believe folder called Quick Access, which consists of folders that you have pinned, or that have been pinned for you (Desktop, Documents, Downloads, Music, Pictures, Videos). File Explorer shows your most frequently used folders on top and recently used files on the bottom. 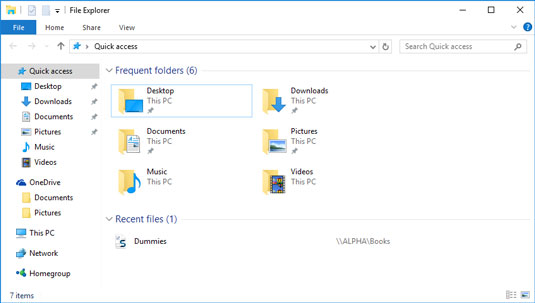 If you've used Windows 7 or 8, you probably wondered what happened to your libraries — they used to appear on the left side of the screen as links to the Documents, Music, Pictures, and Videos libraries. Instead, you get the six folders (not libraries) listed at the top of the figure.

Here's how to bring back your libraries:

In Windows 10, the default libraries aren't hooked up to the Public folders of the same type. Swear once or twice at Microsoft, and roll your Public folders into your libraries.