What are the Windows Server Docker and Docker Hub?

Explore Book Buy On Amazon
Docker is an open-source platform that assists you in packaging and deploying applications in Windows Server 2019. You can run multiple containers on a container host, and because they share the container host’s kernel, they use fewer resources than virtual machines (VMs) because you don’t need the overhead of a hypervisor to manage them.

The Docker server is the brains of the operation. It manages much of what goes on in Docker, including the various objects that are created, and communications with the Docker application programming interface (API). The server component is referred to as a daemon.

The Docker client is where you perform most of your work with containers. Whenever you run a Docker command, you’re running it from the Docker client.

Docker images are stored in the Docker registry.

You may also hear this referred to as a repository. Registry is the official word in Docker documentation, but many developers are used to calling this type of construct a repository. Both words work— be aware that you may see them used interchangeably.

Docker objects is a term used to refer to a multitude of different components, like images, containers, and services.

Docker commands always start with docker and include keywords that determine the action that you want to take. The table lists some of the more common commands that you should remember.

You may be asking, “How do I get to Docker Hub? It sounds pretty cool.” Access the Docker Hub online.

To find an image that you’re interested in, you can simply type your query into the search box at the top. For example, if you want to search for Server Core, just type Server Core and press Enter, as shown. 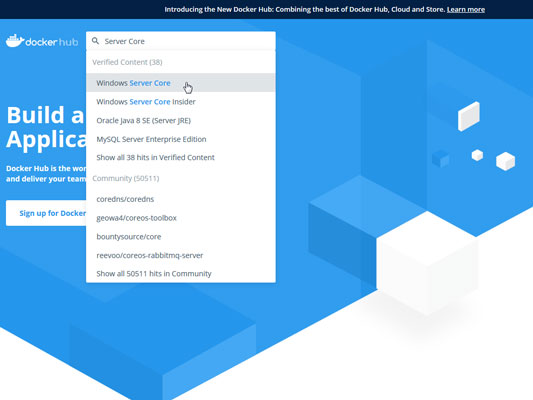 The search box on Docker Hub makes it simple to find public container images from hundreds of organizations.

If only one container image matches your query, you’re taken to a page that is dedicated to that container image. If you type the name of an organization, or your search returns multiple results, you’re presented with search results. If you had searched for Microsoft, for example, you could have gotten any container image that has to do with Microsoft. Official Microsoft container images can be filtered on by selecting Verified Publisher from the filters on the left side of the screen, as shown. 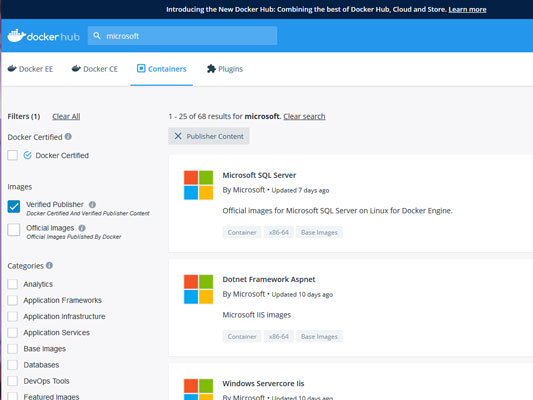 You can filter for just verified publishers in Docker Hub, which ensures that you’re getting an official container image.

One of the really great things about Docker Hub is that you can click a container image to learn more about it. The page that you click into is the same one you get if you search for a product and there is only one result. You’re presented with a description of the container image, which includes available tags and commands needed to use the container image. These commands are often used to accept licensing agreements. The Microsoft SQL Server container image, for example, tells you to run this command to start an MS SQL server instance running SQL Express:

You’re also given the command to pull an image if you’re interested in it. For example, to pull this MS SQL container image into Docker, you would run the following:

One last thing that is really helpful is that you can see how many times a container image has been pulled. This information is useful if you aren’t familiar with the organization that supplied the container image. Underneath the name next to a logo of a down arrow is a number that tells you how many times it has been pulled. Microsoft SQL Server, at the time of this writing, had been pulled over 10 million times, as shown here. 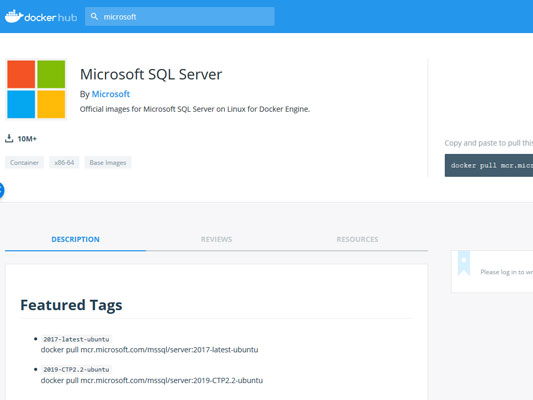 You can see how many times a container image has been pulled. 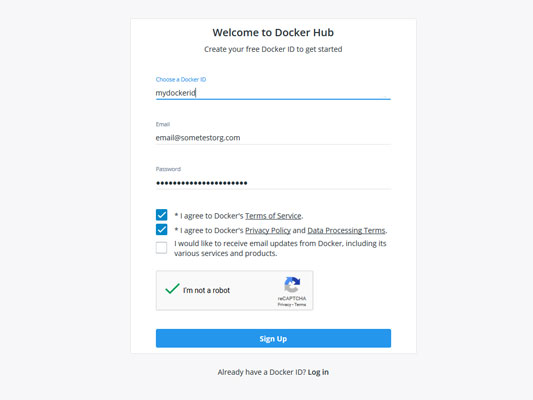 You can get started with Docker Hub with very minimal information — all you need is a Docker ID, an email address, and a password.

You’ll get an email to verify your email address. Click the link in the email to activate your account.

When you log in to Docker Hub after creating your account, you’re asked whether you want to create a repository or create an organization.

You can choose to link your repository to your GitHub or Bitbucket accounts to do automated container image builds. This menu is located in the repository creation menu, though you can go back in later and set it if you need to.

After your repository is created, it will be blank, but it will give you a sample of the command you would need to run to push things to your repository, as shown. 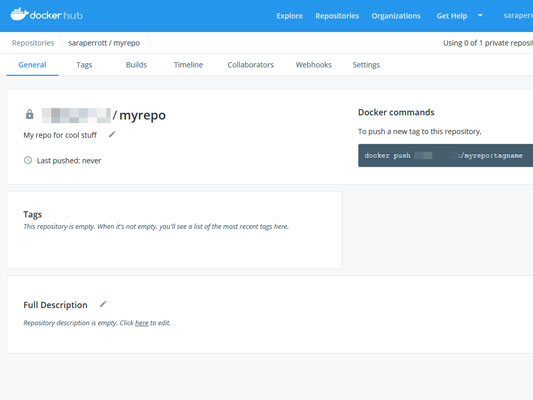 Your repository is empty when you first create it, but it contains the command to push container images to it.

To use your private repository, you first have to log in to Docker; then you can push and pull container images as much as you want. To log in, enter the following command:

To pull the standard Nano Server image from Microsoft’s repository. add the command that will let you push the container image to your repository. You would normally do this after you made changes to the image.

The command uses my Docker ID, followed by the name of my repository, and then the tag used for my container image. In this case, a tag with a value of nano. You can see the command line part in the following figure. 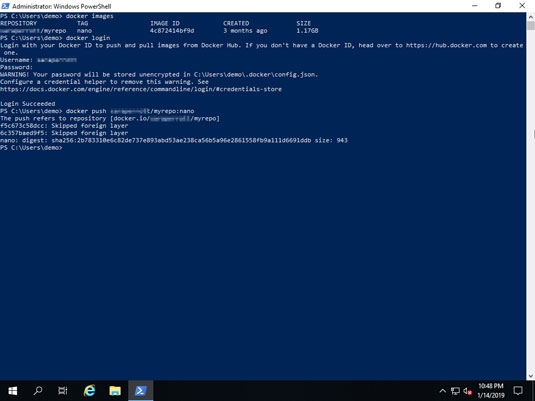 You can use the Docker commands to push images to your private repositories after you log in with the docker login command. 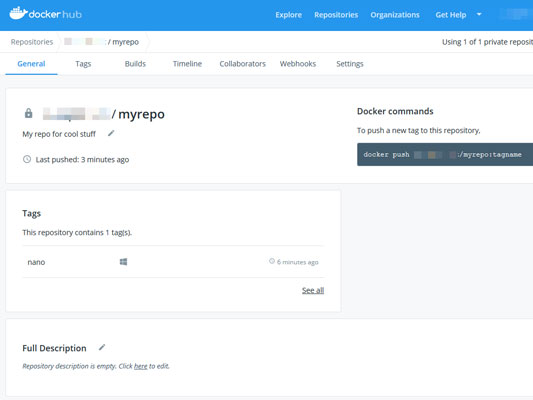 The tagged container image, nano, shows up in Docker Hub after it's pushed from the server.

To pull the container image down to modify it, issue a very similar command to what you used to push the tagged image:

After you make the changes that you need to make (like updating the container image), you can push it back up to your private repository where it’s accessible to any system from which you can log in to your Docker repository.