A Week in the Life of a Trader: Entering and Exiting Positions

Explore Book Buy On Amazon
To help you get a feel for entering and exiting positions, take a look at a sample trade made by a hypothetical position trader. The idea is to help you understand the rationale and the timing. You can also use this example to practice picking entry and exit points based on historical pricing.

As a position trader, your week begins during the weekend. You have a few things to accomplish:

From an educational perspective, one of the most interesting periods to analyze in recent history is the financial crisis of 2007–2009. This was one of the most volatile periods the stock market has seen since the Great Depression. To illustrate exactly what it takes not only to survive but also to succeed as a trader in today’s fast‐paced market environment, let’s take a closer look at the week of December 8, 2008.

Before the trader can begin, let’s recap the market’s performance prior to that week. The broad market indexes peaked in October 2007. Stocks performed poorly over the next year, but they accelerated sharply to the downside in September 2008.

From its October 2007 intraday peak of 1,576 to its November 2008 low, the S&P 500, like most broad‐market indexes at that time, lost over 50 percent of its value. In the months leading up to our sample week in December, the market saw several short, sharp rallies mixed into this distinct downtrend. Failed breaks to the upside printed in both the spring and summer months of 2008, for example. Downside pressure resumed, carrying stocks further into the ground.

However, in November 2008, the S&P 500 shot up nearly 20 percent higher over the span of just five trading days.

Because the markets rallied 20 percent, the major media declared the bear market over. Rather than taking their word for it, you can use your analysis to see whether the persistent downtrend had ended.

The technical indicators on the charts and fundamental economic conditions showed a mixed picture for the first week of December 2008:

Given the preceding factors, you can’t conclude that a bull market had begun, despite what the mainstream media was saying. Instead, the market was most likely in a bearish pullback, but you couldn’t rule out a bull market transition at that time.

Next, you would analyze your current positions in early December 2008, if you had any. Given the market’s volatility, it would not be a surprise if you had already been stopped out of many of your short positions, as well as any long positions that you may have still had. And given your conclusion that the market was probably in a bearish pullback, you wouldn’t initiate any new long positions.

Finally, you would try to look for new potential trading candidates. There was a lot of concern about major bankruptcies because high‐profile bankruptcy announcements during that time period included Linens ’n Things, Circuit City, and Lehman Brothers, while GM was also teetering on the verge of collapse. Avoiding individual stocks at that time was still probably best, at least until you saw a clear indication of a new bull market. Instead, in December 2008, it made more sense to look at broad‐market‐index ETFs, as well as sector ETFs, to find trading candidates.

In December 2008 you couldn’t be certain that the market was in a bearish pullback; it may have been in the beginning of a bull market transition. You would very carefully look for both long and short trading opportunities

As you browse the daily ETF charts, it’s not surprising that you find few exhibiting a long‐lasting trading range. One that qualified at that time was the Utilities Select Sector SPDR Fund (XLU). You do find several patterns that may be attractive for short positions. For example, you find that the ProShares Short S&P500 Fund (SH) had recently made a new high and was in a pullback position. SH is an inverse ETF, so its price rises when the S&P 500 Index falls.

Your final step is to determine the breakout points and identify your entry pricesfor each of the trading candidates you’ve found. You may enter buy stop orders for these trades now, or you may monitor the situation and enter the trades more actively as the trading signals occur.

As an academic exercise, look back at the charts of both XLU and SH, our two trading candidates, and explore how these two options performed in the months and years after December 2008. Determine good entry and exit points during this period to practice your trading on paper. You have the benefit of hindsight on your side, but it’s a great way to learn how to recognize the trading signals and practice developing your own trading plans without putting your real investing capital at risk.

After you’ve entered your trades at the start of a trading week, your daily activities are comparatively easy. At the end of each trading day, you must The markets gapped higher on Monday, December 8. XLU also rallied, but it didn’t break out of its trading range. In fact, it remained in this trading range for the entire week. XLU stayed in a trading range until February 2009. After that it took a major drop to its low on March 2, 2009. After that drop in March 2009, it started a strong upward climb. 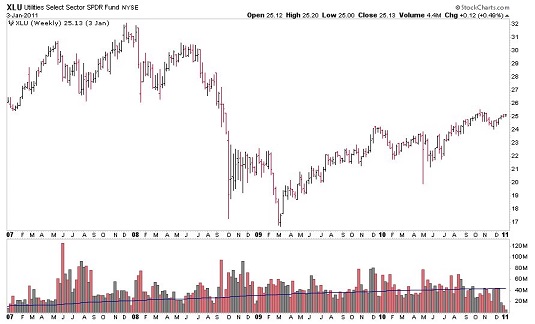 The price for SH, your short‐side candidate, gapped lower at the open and traded in a narrow range throughout the day on Monday. Over the next several days, trading in SH was within a very narrow range. Although this isn’t the classic breakout setup, it’s very similar. The 60‐minute intraday chart for SH looked very much like a long‐running trading range.

The only difference is that this trading range was over a period of several days rather than several weeks or months. You decided that the SH trade was still viable, and you entered a buy‐stop order just above the high of the intraday trading range. This trade was triggered during the day on Thursday, December 11.

Markets gapped lower the following morning, driving the price of SH higher. The opening price was the high price for the day. The ETF traded lower and ultimately touched the top of the prior intraday trading range, but it didn’t fall back into the trading range.

This trade didn’t work out. During the following week, SH fell back into the trading range and hit your stop price, giving you a 4.2 percent loss on this trade. SH continued to fall through December 2009 and then started an upward climb until March 2010. Since that time, it’s been on a downward slide. 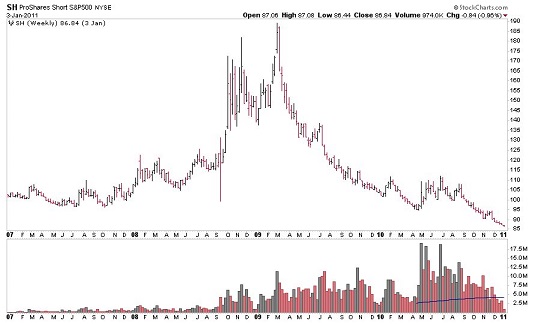 Dr. Joe Duarte is a financial ­writer, private investor and trader, and former money manager/president of River Willow Capital Management. In addition to Options Trading For Dummies, he is the author of Trading Futures For Dummies and Market Timing For Dummies. Visit his website at joeduarteinthemoneyoptions.com